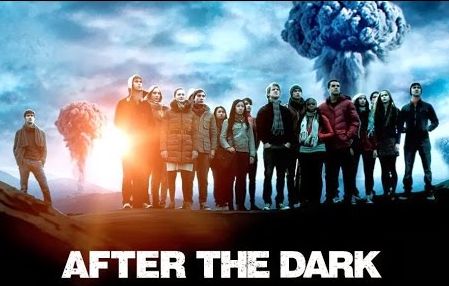 FILOZOFOWIE / AFTER THE DARK / THE PHILOSOPHERS (2013)

– Mr. Zimit (James D’Arcy), a philosophy teacher at an international school in Jakarta, has been challenging his class of twenty with thought exercises to prepare them for their futures out in the world. On the last day of school, he holds a final exercise in which he posits an oncoming atomic apocalypse. There is a bunker ready to shelter them for a year, but it only has supplies for ten people. Zimit asks his students to decide who of them should be allowed into the shelter. The top student in the class, Petra (Sophie Lowe), initially refuses to participate, but Zimit threatens to lower James' academic score if she doesn’t.

Zimit distributes cards to the students, starting with Petra’s boyfriend, James (Rhys Wakefield), followed by Petra herself, and then the rest of the class. The cards contain a detail about their characters in the exercise: James is an organic farmer and Petra is an engineer. The students defend their right to enter the shelter based on the info on their cards, and votes are given after discussion. Students with skills judged useful for survival are allowed in, such as James and Petra, while those who don’t are refused, such as Beatrice (Maia Mitchell), a fashion designer. Zimit is part of the exercise but his skills are hidden. At first the students agree to let him in, but Zimit executes the students who have been rejected, citing that it is more humane than letting them die by radiation. The remaining students race into the bunker and lock the glass door behind them before the explosion. Outside, Zimit holds up a card saying that only he has the exit code. After living out the year in the bunker, the survivors discover that the exit code is necessary. All attempts of breaking out of the bunker are futile, and after the food runs out they commit group suicide.

They decide to try the exercise again, this time with the apocalypse being the explosion of a volcano. The cards given earlier are revealed to contain a secondary detail, and these change the votes, eg. Georgina (Bonnie Wright), who was allowed in earlier because of her status as a surgeon, now has possibly contracted the Ebola virus and is rejected. Petra and James are still voted in despite James' additional character detail of being gay. Zimit and the chosen students enter the bunker, and agree to start procreating immediately. Various heterosexual pairs get together, but as James is gay in this exercise, Petra has to sleep with Zimit. After ten weeks there are no pregnancies, and Zimit argues that they need to change partners. Bonnie (Katie Findlay), a soldier with eidetic memory, protests this, and Zimit threatens her with a gun. Jack (Freddie Stroma) attacks Zimit, stabbing him with a pencil. Zimit staggers to the bunker’s doors, opening them and killing everyone.

James questions Zimit’s motives for this exercise, asking why he seems intent on punishing them. After checking the box with the cards, James discovers that his and Petra’s were fixed, though Zimit refuses to explain his reasons.

The exercise is carried out a third time on an island where bombs are about to fall. Petra asks if everyone will trust her to choose who gets to enter the bunker, and they agree. She picks people who are a potential risk or have non-technical skills, including the opera singer and poet, which angers Zimit. Petra refuses to enter the bunker, asking for the keys to the boats so everyone else can try to escape the blast. Chips (Daryl Sabara), who is inside the bunker, pretends to offer the keys but switches places with her, pushing her inside as the door closes. Zimit is refused entry to the bunker as his exit code is no longer necessary—Bonnie remembers it from the previous iteration. Petra continues the thought exercise, explaining that with such people in the bunker the one year was enjoyable and filled with creativity. When it’s time for them to leave, they discover that the bombs never fell. Zimit narrates that now they will die, as none of them have the technical skills to survive, but Petra counters that they will live the rest of their short lives well, and will welcome death when it arrives. Zimit arrives at the beach, having survived in a cave for the past year, and threatens to shoot James, but the rest of the survivors stand in front of him.

Back in class, Zimit is discomfited by the latest exercise. At the end of the session, everyone leaves except Petra, who confronts Zimit and accuses him of trying to use the exercise to punish her and James. Zimit has been having an affair with Petra, and is offended that she is with James, who he considers beneath her. Petra argues that intelligence isn’t all that matters. The film ends with Zimit alone in the school, going through the motions.