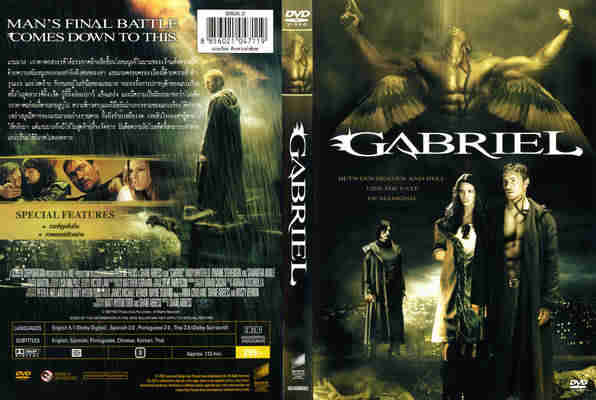 –  Since the beginning of time, heaven and hell have fought over purgatory and the souls trapped inside it. Each side has sent seven warriors: archangels from heaven, fallen angels from hell. They must assume human form to enter purgatory. Hell has attained control, transforming purgatory into a dark, seedy city. The last archangel, Gabriel (Andy Whitfield), endeavours to discover what has become of his comrades and to restore the Light.

Upon Gabriel entering purgatory, four of the seven Fallen—Sammael (Dwaine Stevenson), Asmodeus (Michael Piccirilli), Balan (Brendan Clearkin), and Baliel—gather and Sammael kills an insubordinate Baliel, so reducing the Fallen’s number from seven to six. Meanwhile, Gabriel visits the archangel Michael’s apartment, finding it abandoned. He finds a note from Michael in the apartment, saying how hard it is to stay pure in purgatory. While walking through the city, Gabriel receives a vision about the whereabouts of his comrade Uriel (Harry Pavlidis). However, the leader of the Fallen, Sammael, senses Gabriel’s presence and sends the Fallen Molloch (Goran D. Kleut) to kill him. Gabriel fights and kills Molloch, then proceeds to the city’s outskirts. He finds a dishevelled and alcoholic Uriel hiding in a rundown bus. He explains that the Archangels all assumed human form and became subject to human desires and feelings which weakened them. Cut off from their power, the Archangels were eventually worn down and fell prey to the Fallen who thrived and became stronger the longer they stayed in Purgatory. He reveals to Gabriel that this is what eventually led to the downfall of the Archangels sent before him. Uriel warns Gabriel that if they die in purgatory their souls will die too, they completely vanish. To encourage and remind Uriel of his identity, Gabriel mortally wounds Uriel, convincing Uriel to heal himself. Though surely aware of Gabriel’s presence, Sammael commands the Fallen to wait before taking any action against Gabriel, even though they could defeat Gabriel; Sammael threatens the Fallen if they do anything to Gabriel. Uriel then explains to Gabriel that the Fallen can sense Archangels when they use their powers, and teaches Gabriel to conceal his bright blue angel eyes. Uriel also explains that due to the nature of the evil and darkness that controls purgatory that Gabriel will be cut off from the „source”. He also reluctantly tells Gabriel what happened to some of the other five Archangels: Remiel was killed before Uriel arrived; the whereabouts of Ithuriel (Matt Hylton Todd), Raphael (Jack Campbell), and Michael are uncertain, but Raphael is most likely hiding in the East Side of the city and it is thought that Sammael has killed Michael; and Amitiel (Samantha Noble), who now calls herself Jade, was defeated by Sammael, stripped of her wings, and forced to work as a prostitute. Hearing this, Gabriel goes off into the city to search for Amitiel.

Gabriel travels back to the city, and finds the brothel where Amitiel works. He also encounters Asmodeus, the Fallen who runs the brothel. Gabriel rescues Amitiel and kills the Fallen Balan who tries to rape her. He then heals her of the drugs she has been taking to dull the pain of her job. As Gabriel’s use of power makes his presence known in Purgatory, the Fallen grow weary and impatient of waiting. Amitiel takes Gabriel to the soup kitchen where the Archangel Ithuriel hides. Initially angry at Ithuriel for abandoning his mission of seeking out and destroying the Fallen, Gabriel eventually shows him compassion and understanding. Ithuriel takes Gabriel to the abandoned tunnels beneath the soup kitchen where the gravely wounded Raphael dwells. Gabriel heals Raphael, expending much of his strength. After rebuking Gabriel, Raphael explains that Sammael draws his immense power from the other Fallen. Gabriel proposes to take out the remaining Fallen one by one, before finally facing Sammael. Raphael is unconvinced, as Sammael has already killed the stronger angel Michael.

Gabriel fights and kills the Fallen Ahriman (Kevin Copeland), then returns to Michael’s apartment where he sketches a picture of Amitiel. At the same time Gabriel begins his campaign against the Fallen, the Fallen Lilith (Erika Heynatz) kills Uriel, Asmodeus kills Ithuriel, and Sammael kills Raphael. Driven mad by anger, Gabriel’s eyes turn bright brown, the colour of the Fallen. He returns to the brothel seeking revenge against Asmodeus, randomly killing anyone he finds behind a hotel room door. He eventually finds Asmodeus and discovers that he’s using his nigh unconscious female sex slave, whom of which he’s been consistently and forcibly giving plastic surgery to in an effort to make her facially identical to himself so as to satisfy his narcissism, as a hostage. Asmodeus takes Gabriel’s shock and sympathy toward the girl to his advantage, discards her and begins assaulting Gabriel. Gabriel gains the advantage in the fight, viciously scars Asmodeus thus enraging him and then kills him. Gabriel halts his own imminent fall when he heals and restores the young woman held captive by Asmodeus to return her to her original appearance and depleting the anesthetics given to her. Shocked by his near fall, Gabriel returns to Amitiel. Amitiel comforts Gabriel and they strip naked before copulating. Gabriel then travels to a nightclub and kills Lilith, injecting her with several full vials of Ahriman’s drugs. Gabriel chases Sammael to the nightclub’s rooftop.

Sammael refuses to fight Gabriel, instead asking him to listen to what he has to say. He explains how he despises being an angel, a being created entirely to serve others. He sees purgatory as a chance to take control of his own destiny and lets Gabriel know that it was him all along keeping Gabriel protected and alive in a city amongst all the Fallen, and asks Gabriel to join him. Refusing his offer, Gabriel unwittingly realizes that Sammael is actually the Archangel Michael, his closest friend. The two Archangels fight, but because Gabriel has used up so much of his strength helping the other Archangels, Michael has the advantage. Michael ultimately impales Gabriel’s chest with a metal pipe. Gabriel admits that during his time as a human he has felt rage and anger, but he has also experienced things that Michael hasn’t. An impaled Gabriel embraces Michael, which drives the metal pipe through Michael’s chest also, and tells Michael that he forgives him. Both Archangels collapse. Michael uses the last of his strength to heal Gabriel’s wound, then dies. Light returns to purgatory.

Kneeling in front of Michael’s dead body, Gabriel shouts up at God asking „Is It This That You Wanted?, Is It This You Wanted?”. The healed Gabriel moves to the edge of the rooftop, and muses that he needs to understand why all this happened. He outstretches his arms, and lets himself fall. His final words are, „Forgive me… I hope I see you again…” A post-credits scene shows Gabriel, (wearing different clothing, minus angel wing tattoo and with brown eyes), joining Amitiel and smiling. (The DVD version of the film does not contain the post-credit scene.)