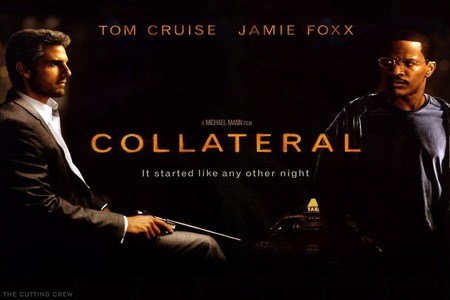 PLOT: Max Durocher (Jamie Foxx), a meticulous Los Angeles cab driver, is working to earn enough to start his own limousine business. One of the evening’s fares is U.S. Justice Department prosecutor Annie Farrell (Jada Pinkett Smith). On the drive to her office, they strike up a conversation and Annie gives Max her business card.

Max’s next fare is Vincent (Tom Cruise) who exits the building just after Annie entered. Impressed by Max’s skill at navigating the streets of LA, Vincent offers Max $600 to drive him for the entire night, against regulations. Max reluctantly agrees, as the money is too good to pass up. As Max waits at the first stop, a man falls onto his car. Vincent reveals himself as a hitman, and the dead man, drug dealer Ramón Ayala, is the first of five targets for the night. He forces Max to hide the body in the trunk and continue driving.

At the second stop, Vincent ties Max to the steering wheel. Max sounds his horn and flashes his lights, attracting the attention of a group of young men. He asks them for help, but instead two of them take his wallet and Vincent’s briefcase. Vincent returns and kills the two, much to Max’s horror. At a gas station, Vincent tells Max they are ahead of schedule and offers to buy him a drink at a jazz club he likes. Vincent admires the trumpet player on the stage, Daniel (Barry Shabaka Henley), and after his set, invites him over for a drink. Vincent and Max listens with enthusiasm as Daniel talks about his experience with famous jazz musician Miles Davis, but Daniel turns out to be Vincent’s third mark and, after the club closes, Vincent kills him in front of Max. Max tells Vincent that he wants out, but Vincent threatens to kill him if he refuses to obey.

Max’s boss, who constantly calls Max over the radio regarding his whereabouts, informs Max that his mother Ida (Irma P. Hall) is trying to reach him. Learning of Max’s nightly visits to his hospitalized mother, Vincent insists Max does not break his routine and visits her. At the hospital, Max grabs Vincent’s briefcase containing files on his targets, runs on a pedestrian bridge and tosses the briefcase onto the freeway. Vincent forces Max to meet drug lord Felix Reyes-Torrena (Javier Bardem) to obtain information on his last two marks, threatening to murder Ida otherwise. Posing as Vincent, Max meets with Felix and successfully acquires the information on a USB flash drive. Vincent heads to the next target, Korean gangster Peter Lim, who is at a nightclub.

Meanwhile, LAPD Detective Ray Fanning (Mark Ruffalo) uncovers the connection between the three victims and reports his finding to FBI Special Agent Frank Pedrosa (Bruce McGill). Frank identifies the victims as witnesses in a federal grand jury indicting Felix for the following day, and thus are target for assassination. Pedrosa assembles a force to secure Lim. At the nightclub, they run into Vincent, who is being followed by Felix’s men. Vincent manages to kill all of Felix’s hitmen, Lim’s bodyguards and Lim himself, then leaves the club. Fanning rescues Max and smuggles him outside, but is killed by Vincent, who beckons Max back into the cab.

Following their getaway, the two start trading personal insults and criticisms. Vincent mocks Max for his lack of ambition, while Max berates Vincent for his disregard for human life. This escalates into an argument that prompts Max into deliberately crashing the cab, intending to stop Vincent’s rampage. However, both men survive and Vincent escapes. A police officer arrives at the crash to help, but then notices Ayala’s corpse in the trunk and arrests Max. He initially surrenders, but while the officer handcuffs him, he sees Vincent’s laptop open in the cab, and learns that Annie is the final target. He overpowers the policeman and takes Vincent’s gun and heads to Annie’s office.

Max calls Annie while she is in the law library to warn her of Vincent’s impending hit on her. At first, Annie accuses him of playing a practical joke on her, but she is shocked when he reveals that he knows about Felix and the other witnesses to the case she is going to prosecute the next day. Vincent breaks into her office two floors below the library. Max sees Vincent in the window and beckons Annie to call 911, just as his cell phone battery dies. He rushes into the building, and using the gun he retrieved, shoots his way through the glass doors to the elevator cage. Meanwhile, Annie calls 911, but Vincent uses a fire axe to cut the power to the floor, and the call is lost.

A tense hunt ensues as Annie is trapped in the library in the dark. Vincent finally finds her and holds her at gunpoint, but Max saves her just in time by wounding Vincent, and the two escape on foot. Still pursued by Vincent, Max and Annie board a metro rail train, but Vincent boards the train as well. Left with no other option, Max makes his last stand and engages in a shootout with Vincent. Vincent reaches into his magazine pouch to reload, but discovers that he is out of ammunition, and that he is fatally wounded. Exhausted, he slumps into a seat and dies, as he refers to an anecdote about a man who died unnoticed on a train. Max and Annie get off at the next station, in the dawn of a new day.