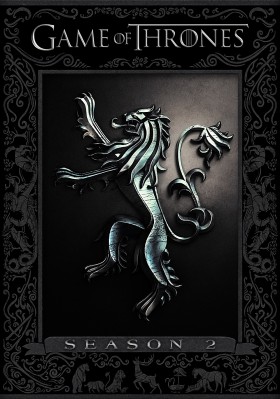 – The Starks declare war on the Lannisters for the death of Ned and having won three victories, Robb Stark offers the Lannisters peace in exchange for the North’s independence, sending Theon Greyjoy to gain Balon Greyjoy’s support and Catelyn Stark to seek Renly Baratheon’s. Cersei Lannister rejects Robb’s terms. Meanwhile, Tyrion Lannister exiles Janos Slynt, head of the Gold Cloaks, to the Wall, promoting Bronn to commander of the watch.

Catelyn arrives at King Renly’s camp to negotiate an alliance, and Brienne of Tarth wins the right to join Renly’s kings guard. Catelyn and Brienne witness Renly’s murder at the hands of dark magic sent by the 'Red Lady' Melisandre, an emissary of Renly’s brother and rival claimant to the Iron Throne Stannis Baratheon. Catelyn and Brienne flee Renly’s camp and rejoin Robb’s army as Renly’s supporters switch their allegiance to Stannis. Meanwhile, Theon betrays the Starks by siding with his father and seizing Winterfell by force. Robb receives news of Theon’s plans and sends men to retake Winterfell, while inside the city the Starks' allies form plans to sneak Bran and Rickon Stark out.

Robb learns that his mother Catelyn has secretly freed Jaime Lannister, now escorted by Brienne of Tarth, in order to ransom her daughters Sansa and Arya; he also enters into a romantic relationship with Volantene healer Talisa Maegyr. Yara Greyjoy arrives at Winterfell to bring Theon back to the Iron Islands, after his botched attempt to recapture the Stark boys.

Tywin Lannister leaves Harrenhal, which allows Arya, Gendry and Hot Pie to make an escape with the help of the enigmatic Jaqen H’ghar. In King’s Landing, Cersei attempts to blackmail Tyrion by abducting the prostitute, Ros, whom Cersei believes to be his secret lover. Leading the defense against Stannis' attack on King’s Landing, Tyrion destroys many of the attacking craft with an exploding ship full of wildfire, and is forced to lead a counterattack as King Joffrey Baratheon and his bodyguard Sandor Clegane each desert the battlefield. Stannis’s forces make it inside the castle, but Tyrion leads his men behind the Baratheon forces via underground tunnels and attacks. Baratheon is defeated when Tywin’s forces, aided by House Tyrell, arrive at King’s Landing shortly after.

Following Khal Drogo’s death, Daenerys and the remnants of her khalasar find refuge in the city of Qarth, where they are taken in by the merchant Xaro Xhoan Daxos. However, Xaro conspires with the warlock Pyat Pree to kill most of Daenerys' servants, kidnap her dragons and assume control of Qarth. Daenerys is lured into a showdown with Pyat Pree at the House of the Undying, where her dragons kill Pyat Pree. Daenerys seals Xaro in his own vault as punishment for his treachery and leaves Qarth with Jorah and her remaining servants.

Whilst on a ranging beyond the Wall, Jon Snow captures a Wildling, Ygritte, who soon leads him into a trap where he himself is captured by Ygritte’s fellow wildlings. Amongst the wildlings' prisoners is fellow ranger Qhorin Halfhand, who convinces Jon to kill him in order to gain the wildlings' trust so he can get close to their leader, King-beyond-the-Wall Mance Rayder. The rest of the rangers set up camp at an ancient fortification, the Fist of the First Men, where they come under attack from an ancient enemy, the White Walkers.