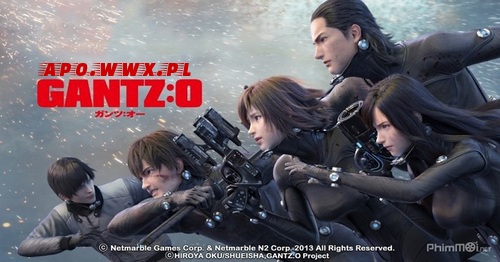 PLOT – While fighting invading monsters, Kei Kurono rescues his friend, Reika. Though she protests, he faces off against the monsters’ leader, dying just after killing it. Reika and her surviving teammates are teleported back to their base. Elsewhere, Masaru Kato dies after attempting to save someone from a knife-wielding man. He wakes up in a small room with Reika and her teammates: Yoshikazu Suzuki, an old man; Joichiro Nishi, a surly teenager; and an angry, unidentified man. Suzuki explains that, in the past, they have each died and woken in the room. They are subsequently forced to fight against waves of monsters. Before Suzuki can explain further, a black orb they identify as Gantz announces their next mission is about to begin. The angry man defiantly refuses to participate, and Nishi kills him, reasoning that he will be a liability.

After putting on skintight black suits, the group is teleported to Osaka; Suzuki, confused, says they are usually sent to Tokyo. When Kato presses for more answers, Nishi threatens to kill him. Suzuki quickly explains more details: the team is given two hours to kill every monster in the city; if they fail, they die. After Kurono and his team meet another team, some of whose members have exotic weapons, Suzuki tells him that players accrue points for killing monsters. Anyone who scores 100 points can choose from three bonuses: upgraded weaponry, the ability to resurrect a fallen teammate, or freedom. Nishi turns invisible to stealthily wait for high point monsters. The others watch as the better-equipped team slaughters monsters. Reika and Suzuki urge Kato to stay out of unnecessary combat, but he insists they rescue the city’s scared citizens; they refuse, saying they are too weak.

Amused to find Kato fighting monsters alone, Anzu Yamasaki, a member of the other team, follows him, trying to figure out why he is risking his life. Kato says he is a student who lives alone with his younger brother after they were orphaned. Yamasaki reveals she has a young son and says they have something in common: both must stay alive to help someone who depends on them. Although Yamasaki initially believes him to be showing off, she eventually believes he intends to help others and joins him. After killing a monster that was menacing several survivors, Yamasaki proposes that if they survive, the two should live together with her son and his brother. Although surprised, Kato agrees, and they rejoin the others.

A gigantic monster rises from the water, and an equally large mecha appears, piloted by seven-time winner Hachiro Oka. Oka kills the monster but loses his mecha. Two other multiple winners die fighting, when they become overconfident. Oka, wounded and fighting without his best weapons, engages the leader, who appears first as an old man, a naked woman, and finally a skull-headed demon. Oka appears to win but tells them it is not dead; instead, it must be taken by surprise to be killed, and his current weapons make it too dangerous. After rising, the demon easily defeats Suzuki, Reika, Yamasaki, Nishi, and Kato. Suzuki is heavily wounded when he sacrifices himself to save Kato, and Nishi’s arm is ripped off. Instead of killing them, though, it goes after Oka, who has left to retrieve better weapons.

Knowing someone must defeat the demon soon and Oka may be too wounded, Kato acts as a decoy in a trap. The demon, having killed Oka, attacks Kato, and the others shoot it from a distance. Before dying, the demon kills Yamasaki and maims Kato. Kato collapses beside Yamasaki’s body, and the others assume him dead. Reika, Suzuki, and Nishi are surprised when he rejoins them at the base, where all are fully healed. When the scores are tallied up, Kato has 100 points; Reika and Suzuki encourage him to choose his freedom, but he resurrects Yamasaki. After Gantz allows them to leave, Kato races to return to his brother. The others discuss how Kato previously won the game, had his memory wiped with his freedom, and has somehow returned, unchanged from his previous willingness to sacrifice himself for others.