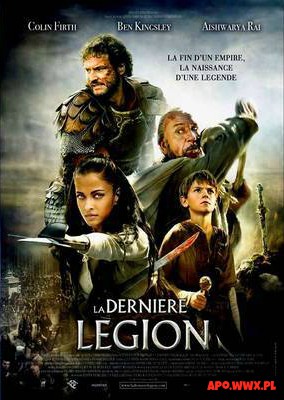 – The film is narrated by Ambrosinus, native to Britain, who knows of a legend concerning the sword of Julius Caesar, which was hidden away from evil men. It begins shortly before the coronation of Romulus Augustulus as Emperor in 475.

Having traveled through much of the known world in search of Caesar’s sword, Ambrosinus has then become the tutor to the young Romulus. A Druid and part of a secret brotherhood protecting the sword, he at times gives the impression he is a magician, but his „magic” is usually revealed to be simple trickery. One of the running concepts of the movie surrounds the question of whether or not Ambrosinus has any actual magical abilities or simply an illusionist. Romulus’s father Orestes rules Rome but is not Emperor himself.

On the day before the coronation, Odoacer, commander of the barbarian Goths allied with Rome, demands a third of Italy from Orestes, but is rebuffed. The same day, Romulus meets the general of the Nova Invicta Legion, Aurelianus Caius Antonius, called „Aurelius”.

The night after Romulus is crowned, Rome is attacked by the Goths. Most of Aurelius’s men, pledged to protect the emperor, are killed, though Aurelius is only stunned and left for dead. Orestes and his wife are killed by Odoacer’s lieutenant Wulfila, who captures Romulus.

The next day, Odoacer, now ruler of the Western Empire, plans to have Romulus killed. However, Ambrosinus convinces Odoacer to spare the boy. Instead, Romulus is exiled to Capri along with Ambrosinus, guarded by Wulfila and his men. His prison is a villa constructed more than four centuries earlier by the emperor Tiberius.

With Ambrosinus’s help, Romulus discovers a hidden chamber within the villa. He comes across a statue of Caesar holding the fabled sword, forged by a Chalybian smith after his military campaigns in Britain. Writing near the statue’s feet proclaims the sword was made for „he who is destined to rule”. This is interpreted as a prophecy by various characters, and Romulus keeps the weapon.

The two are rescued from Capri by the loyal Aurelius and three surviving legionaries, Vatrenus, Batiatus, and Demetrius, accompanied by a female agent of the Eastern Roman Empire – a warrior named Mira. They take Romulus to a seaport where the Eastern Roman Empire’s emissary (whom Mira works for) and the senator Nestor have promised safe passage to Constantinople. However, they barely escape after they learn the Senate and the Eastern Empire have betrayed them and sided with Odoacer.

Ambrosinus persuades Romulus to seek refuge in Britain, where the Ninth Legion (called the Dragon Legion) may remain loyal, being far from the events. They are followed by Wulfila and his men; the Goth covets Caesar’s sword after learning the prophecy. Crossing the Alps and the English Channel, the party travels to Hadrian’s Wall and initially find no evidence of the legion until a farmer approaches and reveals he was its commander. With the collapse of Roman support of Britain, the legion had decided to disband and settle as farmers. Most of the men in the legion had married and had families. They also did not want to antagonize the powerful warlord Vortgyn. During their stay in the small Celtic village, Romulus meets and befriends a young girl named Igraine. Aurelius and Mira practice swordfighting and become close to each other. Ambrosinus told Romulus of a scar on his chest, similar to the design on the sword hilt, which he received from Vortgyn after he refused to tell him where the sword of Caesar was.

Vortgyn also desires the sword of Caesar as he aspires to rule the whole of Britain. It is revealed that Vortgyn and Ambrosinus are old enemies. After meeting with the Goths, Vortgyn decides to either capture or kill Romulus as a gesture to Odoacer. After confronting Igraine outside of the village, he convinces her to tell everyone in the village to surrender Romulus and has several of his men kill the blacksmith’s wife and sons. When a tearful Igraine tells the villagers of what has happened, Aurelius confesses that Romulus is the emperor of Rome. The blacksmith then demands revenge on his wife’s and sons’ deaths, and Aurelius and his men decide to lead an army to Hadrian’s Wall to face Vortgyn’s armies in one final battle.

Before leaving the village, Romulus receives from Igraine a suit of Roman armor which belonged to her brother, which he has since outgrown. Aurelius, wielding Caesar’s sword, leads his men and a small number of Celtic warriors against Vortgyn’s forces at Hadrian’s Wall. Aurelius, his men, and the archers pelted the infantry with arrows, while Mira, Romulus, and several Roman and Celtic soldiers struggled to hold the enemy at the gate. Despite their casualties, Vortgyn’s soldiers began to slowly overwhelm the small force on the wall. The battle appears hopeless until the rest of the Ninth Legion, having taken up their old Roman arms and uniforms, appear and turn the tide. The two warring sides cease their hostilities when Ambrosinus confronts and burns Vortgyn alive at a tree-sanctuary of his secret brotherhood near the battlefield.

After having fought and severely injured Aurelius, Wulfila is confronted by Romulus who is armed with Caesar’s sword. As Romulus stabs Wulfila in the chest he says “that’s for my mother.” Romulus then runs Wulfila through with the sword and adds, “and for my father!” He tells Aurelius that he fought like a dragon, whereupon Aurelius replies that Romulus fought like the son of a dragon.

Repulsed by the deaths in the battle, Romulus heaves away his sword which remarkably pierces a large rock and becomes lodged there. Many years later, Ambrosinus, now known by his Druid name, Merlin, takes a young boy to the battlefield to describe the now legendary events. Merlin, who has visibly aged little since the battle, says that Aurelius married Mira and the two raised Romulus as their own son. He became a wise ruler, took the girl Igraine as his wife, and adopted the name „Pendragon”. The boy, Arthur, recognizes Romulus as his father and Igraine as his mother.

In a final scene, the sword of Julius Caesar is shown embedded in the stone, with moss growing on the blade, covering the original inscription, leaving only the Latin letters which, when read as a single word, read Excalibur.