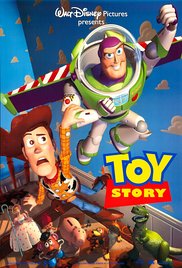 PLOT: In a world where toys are living things who pretend to be lifeless when humans are present, a group of toys, owned by six-year-old Andy Davis, are caught off-guard when Andy’s birthday party is moved up a week, as Andy, his single mother and infant sister Molly are preparing to move the following week. The toys' leader and Andy’s favorite toy, an old-fashioned cowboy doll named Sheriff Woody organizes the other toys, including Bo Peep the shepherdess, Mr. Potato Head, Rex the Dinosaur, Hamm the Piggy Bank and Slinky Dog, into a scouting mission. Green army men, led by Sarge, spy on the party and report the results to the others via baby monitors. The toys are relieved when the party appears to end with none of them having been replaced, but then Andy receives a surprise gift – an electronic toy space ranger action figure named Buzz Lightyear, who believes that he is an actual space ranger.

Buzz impresses the other toys with his various features, and Andy begins to favor him, making Woody feel left out. As Andy prepares for a family outing at Pizza Planet, his mother allows him to bring only one toy along. Fearing Andy will choose Buzz, Woody attempts to trap him behind a desk, but ends up knocking him out a window instead, resulting in the other toys accusing Woody of murdering Buzz out of jealousy. Before they can exact punishment, Andy takes Woody instead and leaves for Pizza Planet. When the family stops for gas, Woody finds that Buzz has hitched a ride on the car as well, and the two fight, only to find the family has left without them. They manage to make their way to the restaurant by stowing away on a pizza delivery truck, where Buzz, still believing he is a real space ranger despite Woody’s attempts to convince him otherwise, gets them stuck in a crane game, where they are picked out by Andy’s destructive neighbor Sid Phillips.

Woody attempts to escape from Sid’s house, but Buzz, finally discovering he is a toy, sinks into despondency. Sid plans to launch Buzz on a firework rocket, but his plans are delayed by a thunderstorm. Woody tells Buzz about the joy he can bring to Andy as a toy, restoring his confidence. The next morning, Woody and Sid’s mutant toy creations rescue Buzz just as Sid is about to launch the rocket and scare Sid into no longer abusing toys by coming to life in front of him, and he runs into his house while screaming. Woody and Buzz then leave Sid’s house just as Andy and his family drive away toward their new home.

The duo tries to make it to the moving truck, but Sid’s dog, Scud, sees them and gives chase. Buzz gets left behind, and Woody tries rescuing him with Andy’s RC car, but the other toys, thinking Woody eliminated RC as well, attack and toss him off the truck. Having evaded Scud, Buzz and RC pick up Woody and continue after the truck. Upon seeing Woody and Buzz together on RC, the other toys realize their mistake and try to help them get back aboard but RC’s batteries become depleted, stranding them. Woody ignites the rocket on Buzz’s back and manages to throw RC into the truck before they soar into the air. Buzz opens his wings to free himself from the rocket before it explodes, gliding with Woody to land safely into a box in the van, right next to Andy.

On Christmas Day, at their new house, Woody and Buzz stage another reconnaissance mission to prepare for the new toy arrivals. As Woody jokingly asks what might be worse than Buzz, they discover Andy’s new gift is a puppy, and the two share a worried smile. 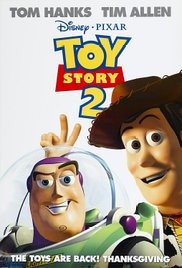 PLOT: Woody prepares to go to cowboy camp with Andy, but when Woody’s right arm gets ripped accidentally, Andy puts him on a shelf and leaves without him. The next day, Woody finds Wheezy, a penguin squeaky toy, has been shelved for months due to a broken squeaker. Andy’s mother puts Wheezy in a yard sale, but Woody rescues him, only to be stolen by a greedy toy collector, who takes him to his apartment. Buzz Lightyear and all of Andy’s toys identify the thief from a commercial as Al McWhiggin, the owner of a toy store called Al’s Toy Barn. Buzz, Hamm, Mr. Potato Head, Slinky Dog, and Rex all set out to rescue Woody.

At Al’s apartment, Woody learns that he is a valuable collectable based on a 1950s TV show called Woody’s Roundup and is set to be sold to a toy museum in Tokyo, Japan. While the toys from the show—Jessie, Woody’s horse Bullseye, and Stinky Pete—are excited about going, Woody intends to return home since he is still one of Andy’s toys. Jessie is upset because the museum is only interested in the collection if Woody is in it, meaning they will return to storage if he is absent from the collection. When his arm is torn off completely, Woody attempts to retrieve it and escape but is foiled when Al’s television set turns on. Woody finds the TV remote in front of Jessie’s display case and believes she is responsible. The next morning, a toy repair specialist fixes his arm, and Woody learns that Jessie once belonged to a child named Emily, who eventually outgrew her and gave her away. Stinky Pete warns him that the same fate awaits him when Andy grows up, whereas he will last forever in the museum. Woody decides to stay, now believing that all toys will eventually get discarded by their owners.

Meanwhile, Buzz and the other toys reach Al’s Toy Barn. While searching for Woody, Buzz is imprisoned in a cardboard box by another Buzz Lightyear action figure, who still believes he is a real space ranger. New Buzz joins the other toys, who mistake him for their Buzz. After discovering Al’s plan, they arrive at his apartment while Andy’s Buzz escapes and pursues them, accidentally freeing an Emperor Zurg toy, who immediately goes after him with the intent of destroying him. After the toys find Woody, Buzz rejoins them and proves that he is Andy’s Buzz, but Woody refuses to go home. Buzz reminds Woody that a toy’s true purpose is to be played with, which he would never experience in a museum. After seeing a boy play with him on TV, Woody changes his mind and asks the Roundup toys to come with him. Pete refuses and prevents the gang’s escape; having never been sold to children, he wants to go to the museum where he will be appreciated forever. Al then returns, packs the gang in a case for transport, and leaves for the airport.

Andy’s toys follow Al, but are caught by Zurg, who battles New Buzz until Rex knocks him off the elevator, injuring him. While riding the elevator down, the toys attempt to rescue Woody and the others from Al’s suitcase, but they fail. New Buzz then chooses to remain behind with Zurg. Accompanied by three toy Aliens, Andy’s toys steal a Pizza Planet delivery truck and follow Al to the airport, where they enter the baggage handling system and free Woody. Stinky Pete rips Woody’s arm with his pickaxe and threatens him, but Andy’s toys stuff him into a little girl’s Barbie backpack. They free Bullseye, only for Jessie to end up on the plane bound for Japan. Assisted by Buzz and Bullseye, Woody frees Jessie and the toys find their way home.

When Andy returns from camp, he accepts Jessie, Bullseye, and the Aliens as his new toys, thinking his mother bought them, and repairs Woody’s torn arm. Meanwhile, Al’s business has suffered due to his failure to sell the Roundup toys. Woody tells Buzz that he is not worried about Andy discarding him because, when he does, they will still have each other for company. Wheezy’s squeaker has been fixed and he sings „You’ve Got a Friend in Me”.