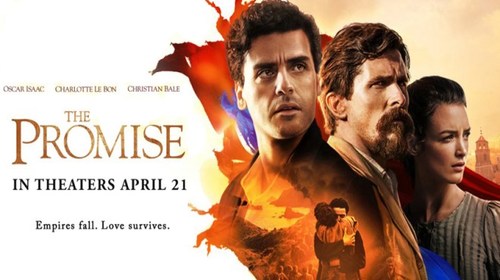 PLOT – Mikael is an apothecary who lives in the small Armenian village of Sirun in the southeast part of the Ottoman Empire. In order to help pay the expenses for medical school, he promises himself to the daughter of an affluent neighbor, receiving 400 gold coins as a dowry. This allows him to travel to Constantinople and attend the Imperial Medical Academy.

There, he befriends Emre, the son of a high-level Turkish official. Through his wealthy uncle Mikael also meets Ana, an Armenian woman raised in Paris, who is involved with an American reporter for the Associated Press, Chris Myers (Christian Bale). In due course, Mikael falls in love with Ana just as international tensions begin to rise with the outbreak of World War I. Mikael temporarily manages to avoid conscription in the Ottoman army through a medical student exemption with the help of Emre. But when he tries to save his uncle from imprisonment during the roundups of April 24, 1915, he is detained and sent to a prison labor camp himself.

Mikael eventually escapes the camp, returning to his village only to find the Turks have violently turned on their Armenian fellow townspeople. His parents, and particularly his mother, persuade him to marry his betrothed and seek refuge in a remote mountain cabin where she soon becomes pregnant. A difficult pregnancy leads Mikael to bring his wife back to the care of his mother in the village. There he learns that Ana and Christopher are at a nearby Red Cross facility and he goes to seek their help for his family to escape the imminent Turkish threat.

Departing the mission with a group of orphans, they head back to Sirun to retrieve Mikael’s family. Along the way, however, they encounter a site of a massacre, as it becomes clear all of Sirun’s inhabitants, including Mikael’s family, save his mother, have been killed by Turkish troops. Chris is captured by Ottoman troops and sent back to Constantinople, charged with being a spy and slated for execution by authorities; with the help of Emre, and through the intercession of American Ambassador Henry Morgenthau, he is released and allowed to depart for Malta. Once there, he boards the French cruiser Guichen, as it prepares to set sail along the Ottoman coast. For helping Chris, Emre is executed by firing squad.

Escaping pursuit, Mikael, Ana, and the orphans join a large group of refugees determined to fight off the Ottoman army on Musa Dagh. As they fend off repeated assaults, Mikael’s mother succumbs to her wounds and is buried on the mountain. The refugees hold on long enough to escape on the back side to the coast as the Guichen comes to their rescue. But as the launches return to the ship, a Turkish artillery barrage throws Ana and Yeva, the young daughter of Mikael’s uncle, overboard. Mikael jumps in after them and is able to rescue Yeva but Ana drowns.

In a voice over, Mikael recounts that he adopted Yeva and together they settled in Watertown, Massachusetts. During Yeva’s wedding reception in 1942, with the Armenian orphans who have now grown up in attendance, Mikael presides over a toast, wishing good fortune to their families and the generations to come.