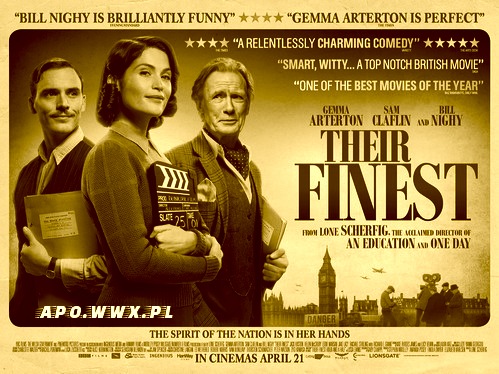 PLOT – Catrin Cole (Arterton) is summoned to an interview at the Ministry of Information, where she is taken on to write script for short information films. Her husband Ellis Cole (Jack Huston) is a war artist, unable to get an exhibition and exempted from the call-up due to a Spanish Civil War leg wound – he is initially accepting of her job but when she becomes the only wage earner he begins to feel threatened and plans to send her back home to Wales, on the pretence of keeping her safe from the London Blitz.

After a clash with the actor Ambrose Hilliard (Nighy) when he asks for a change to one of her scripts, Catrin’s superiors instead send her to research a news story about twin sisters Lily and Rose sailing their father’s boat to take part in the Dunkirk evacuation. However, on meeting them she discovers that they in fact had engine trouble just off Southend-on-Sea shortly after setting off and were towed back into port by a tug which had taken part in the evacuation and so were mistakenly reported as reaching Dunkirk themselves. At risk of losing her Ministry job and being sent back to Wales, Catrin lies to her superiors and they agree to make the film as „The Nancy Starling”, with Catrin, Tom Buckley (Claflin) and Raymond Parfitt (Paul Ritter) as the scriptwriters. They begin to write a scenario and – even when their superiors discover Catrin’s deception – she convinces them to continue with its production as fictional film rather than a factual one.

Hilliard is offered the part of a drunken uncle in the film by his agent Sammy (Eddie Marsan). He initially refuses it out of pride but after Sammy’s death in an air-raid he is reluctantly won round to it by Sammy’s sister Sophie (Helen McCrory), who has taken over his agency work. Initial location photography begins but rapid rewrites prove necessary when an American character is added on the orders of the Secretary of War (Jeremy Irons) to give the film appeal in the USA. The Secretary also orders that the character be played by Carl Lundbeck (Jake Lacey), a handsome Norwegian-American pilot from one of the Eagle Squadrons who proves photogenic in silent film but unable to act in ‚talkies’. The film is saved, however, by judicious editing and by Catrin convincing Hilliard to give Lundbeck acting lessons in return for improvements to Hilliard’s part.

Catrin and Buckley develop a combative friendship and affection during the location filming, but the filming delays cause her to miss the opening of her husband’s war art exhibition. Just before leaving to see the exhibition’s final day, Catrin reveals to another member of the crew that she is in fact Ellis’ long-term lover and not his wife, having only taken his name for the sake of propriety. On returning to their home in London, she finds Ellis having sex with a younger woman (Natalia Ryumina) and breaks up with him, returning to Devon. Buckley has found out about the nature of Catrin’s ‚marriage’ and he proposes to her, but she refuses and they argue. Soon after arriving in London for interior photography, however, Catrin changes her mind and the two share a passionate kiss, just before a stagehand asks Catrin to come answer a query from Hilliard about rewriting his character. Buckley goes to answer it instead of Catrin, but on his way there Catrin sees him killed by a falling lighting rig.

A more US-audience-friendly ending is added and a gap in the film is filled by Catrin’s suggestion that one of the twins fixes the boat’s fouled propeller rather than one of the male characters – a change she had suggested from the very start. In shock and grief, Catrin withdraws from the world of film but a visit from Hilliard convinces her to return, in part to write him fulfilling parts such as a cat burglar air-raid warden, now that he has accepted that he can no longer play matinee idol parts. She attends a screening of her film, speaking to two moved members of the audience, before sitting down to write her next film.