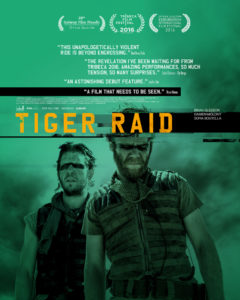 – The soldiers Joe and Paddy are working for a private security crew in the Middle East whose boss is a man called Dave. Their next mission is to kidnap Shadha, the daughter of a powerful man. During this mission more and more about Joe’s and Paddy’s past is revealed. The men trust each other less and less. The situation is getting even more complicated when Paddy realizes that Shadha is his former big love. Now he not only needs to finish his mission, but has to protect Shadha from his partner who tries to rape and kill the girl.

When Joe finds out that Shadha is more important to Paddy than his job, Joe hits Paddy unconscious and talks with the girl to try to find out more about Paddy’s past. Shadha tells Joe that she loved Paddy but she did not want to see him again. Paddy had choked and drugged her to keep her down and she only had loved him because she did not only want to feel helpless and trapped.

Joe wakes Paddy and tells him that Shadha hates him, however Paddy replies that Shadha is the only woman he has ever cared for. Joe reveals that he had killed Ruby, the only person he had ever loved before, because he had to do it. Joe adds that Paddy has to make the same sacrifices for Dave, by killing Shadha. Paddy replies that he would never kill Shadha for Dave. Paddy later says that he would kill Dave by the moment he comes to the place. However, Paddy is never able to kill Dave as Shadha shoots Paddy first, just when Joe reveals he loves Paddy. Shadha leaves and Joe sees a vision of Ruby. Ruby tells Joe that they all pay and that it is time to end it.