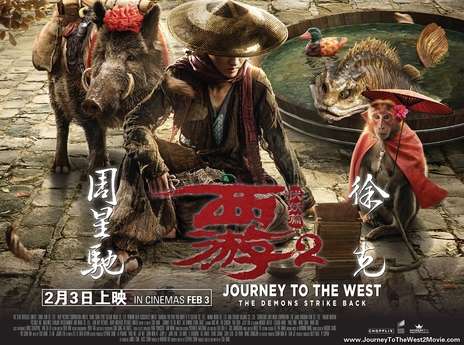 Journey to the West The Demons Strike Back (2017)

PLOT – The monk Tang Sanzang (Kris Wu) finds himself as a giant in a city in India. His master congratulates him on reaching India and retrieving the Sutras, and gives him a halo as a reward. The halo however malfunctions and Tang awakes from his dream to find himself on an alley in a village of circus performers with his three disciples; Sun Wukong (Lin Gengxin), Zhu Bajie (Yang Yiwei), and Sha Wujing (Mengke Bateer). Tang encourages Sun Wukong to perform for the villagers, but he refuses. Angered by his stubbornness, he agitates Sun Wukong by calling him a „bad monkey”, which causes Sun Wukong to smash the village and damage the villagers' homes. The terrified villagers present the group with money and food for travelling, but Sun Wukong continues wreaking havoc, sending Zhu Bajie and Tang flying through the air. That night, Tang whips Sun Wukong for his disobedience.

The next morning Tang goes to find water for their breakfast congee and comes across a house. Its host, a beautiful woman in a splendid outfit (Wang Likun), welcomes them all in for breakfast. As Sun Wukong sees through their disguises as spider demons, he purposely provokes them, and she and the others show their true form as giant spiders. During their battle, the demons come together to form one huge spider. Sha Wujing falls ill and slowly bloats into a fish-like creature after absorbing the spiders' poison. Sun Wukong defeats the spider, and Tang interferes in an attempt to exorcise her, but Sun Wukong smashes the demon’s head with one blow. Tang is again annoyed at Sun Wukong’s disobedience and whips him again that evening. Later that night, the enraged Sun Wukong discusses with the others his plans to kill Tang, but the others fear Tang’s mighty Buddha Palm powers. Tang overhears this and prays to Buddha to help him, and also confesses that he actually does not know have Buddha Palm powers. Zhu Bajie overhears this and tells Sun Wukong, who challenges Tang to a fight. However just as he is about to strike, a blinding ray of light shines from the heavens and Sun Wukong retreats.

The next day, they pass into the capital city of the Biqiu Kingdom, and a minister (Yao Chen) comes out to greet them and bring them to see the King, an immature and child-like man who likes to play. He orders Tang to perform for him but he doesn’t have anything to showcase. Sun Wukong thus pastes an „obedience sticker” on Tang so that Tang can copy his actions and perform stunts for the King. However, he goes too far and makes Tang continuously slap the King, who throws them out. Tang orders Sun Wukong to return and apologize, but it is revealed that Sun Wukong purposely provoked the King to make him reveal his form as a demon, the Red Boy. They fight and Sun Wukong defeats the Red Boy, also freeing the real King of Biqiu (Bao Bei’er) from his cage under the throne. As a reward for helping him, the King presents them with a beautiful girl, Felicity (Lin Yun), to accompany them on their travels. As Felicity dances for them, Tang is reminded of his deceased lover, Ms Duan (Shu Qi).

The group set off and on the way, Sun Wukong realizes that Felicity is actually a demon. However, Tang does not believe him, so they set off to visit Felicity’s home village. Sun Wukong becomes enraged with Tang’s lack of trust in him and that night he destroys the whole village, killing everyone. Tang stops him from killing Felicity, further angering Sun Wukong who attacks Tang, but Felicity finally confesses that she is actually the demon White Bone Spirit, and that the whole village was an illusion conjured by her. Sun Wukong flares up and turns into a giant gorilla and swallows Tang. At that moment, the minister and the Red Boy arrive and see that Monkey had fallen for their trick.

They had deliberately sent Felicity with them to cause strife between Tang and Sun Wukong, so Sun Wukong would kill his master. However, Sun Wukong spits Tang out, as they had in fact known this all along but played along with it, so that the minister would reveal her true form. They battle and the minister creates an illusion of Buddhas surrounding Monkey, using them to fight him. However the real Buddha uses his giant palm to destroy the false Buddhas; and reveals the minister’s real identity as the Immortal Golden Vulture.

After the battle, Tang heads back to find Felicity. He has no choice but to free her soul as there is too much demon in her. When Felicity asks Tang if he loves her, Tang replies that he has only one person in his heart. The animosity between Tang and Sun Wukong has finally dissolved, Sha Wujing sneezes out the poison and turns back to his human form, and they and Zhu Bajie continue their journey to the West through a desert.