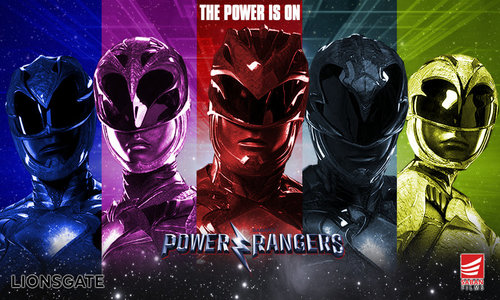 PLOT: In Cenozoic-era, six interplanetary warriors, the Power Rangers, are tasked with protecting life on Earth and the Zeo Crystal. However, the Green Ranger, Rita Repulsa, betrays them and plans to dominate the universe. The Red Ranger, Zordon, survives Rita’s attack and takes five of the Rangers' power source, the Power Coins, and hides them, while ordering his assistant Alpha 5 to perform a meteor strike that kills Zordon, sends Rita to the bottom of the sea and the loss of her Power Coin, and results in the dinosaurs' extinction but successfully foils his team’s traitor’s scheme.

In the 21st century Angel Grove, California, high school football star Jason Scott is dismissed from the team and placed under house arrest after a failed prank. In detention, he encounters Billy Cranston and Kimberly Hart. That evening, Billy deactivates Jason’s ankle monitor and the two head to an abandoned gold mine. Jason leaves to explore and encounters Kimberly. Billy detonates explosives to destroy some rock, attracting the attention of Jason, Kimberly, and nearby students, Trini and Zack. The five discover the Power Coins, each taking one. Mine security show up and chase them. While escaping, their car is hit by a train. The five find themselves at home the next morning and discover they have been granted superhuman abilities. Elsewhere, Rita’s body is found. Upon awakening, she goes on a rampage, hunting pieces of gold that she can find in order to raise her minion Goldar to find the Zeo Crystal.

The five teenagers return to the mine, discover an ancient spaceship, and meet Alpha 5 and Zordon’s consciousness. They inform the teenagers about the original Rangers and about Rita, warning them that they have eleven days until Rita has her full power, finds the Zeo Crystal, and uses it to destroy all life on Earth. The five leave the ship with no intention of returning until Zordon pleads with Jason to convince the team to prepare for Rita’s oncoming attack.

The five return to train the next day, but they cannot morph. They spend the next week training against simulated Putties and unsuccessfully trying to morph. In an attempt to inspire the Rangers, Alpha reveals the Zords. Zack takes his Zord out for a joyride and almost kills the other Rangers when he crashes it into the cave where they train. This angers Jason, and they get into a fight. In trying to separate the two, Billy spontaneously morphs. However, when Billy becomes conscious of it, the armor disappears. Angered at their lack of progress, Zordon dismisses the group. Jason returns to the ship to confront Zordon and discovers that once the Rangers morph, it will open up the Morphing Grid and allow Zordon to restore himself in a physical body. Feeling betrayed, Jason accuses Zordon of using the team for his own benefit. That night, the team camp out at the mine above the ship and bond with each other.

Later that night, Rita attacks Trini in her home and tells her to bring the Rangers to the docks. The team go to fight Rita but are quickly defeated. Rita forces Billy to reveal the location of the Zeo Crystal, kills him, and releases the others. The Rangers take Billy’s body to the ship and ask Zordon to resurrect him, but he tells them that he cannot. The Rangers admit that they’d give their lives for each other and resolve to defeat Rita. In doing so, they unlock the Morphing Grid, and Zordon revives Billy at the sacrifice of ever being able to restore his physical self. With the team restored and with new confidence, the Rangers are able to morph into their armor.

In a mid-credits scene, in detention, the teacher announces that Tommy Oliver will be joining them, but his desk is empty save for a green jacket.