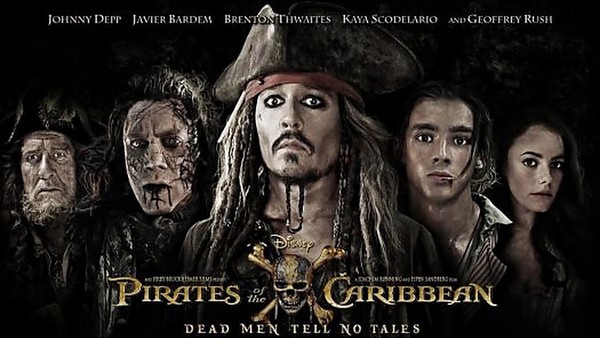 PLOT – Following the ending of At World’s End, 12-year old Henry Turner boards the Flying Dutchman to inform his father, Will Turner, that the mythical Trident of Poseidon is able to break his curse and free him from his ship. Will does not believe the Trident exists and orders Henry to leave his ship and never come back.

Nine years later (and five after the events of On Stranger Tides), Henry works on a British Royal Navy warship. While chasing a pirate ship, Henry realizes the captain is about to sail them into the Devil’s Triangle. The captain dismisses his concerns and has Henry locked up for attempting mutiny. As they sail into the Triangle, they come across a shipwreck that quickly comes to life with undead sailors, led by Captain Salazar. The ghost crew board the ship and kill everyone in their path. Henry is confronted by Salazar, who sees a wanted poster for Jack Sparrow in Henry’s cell. He allows Henry to live so he can deliver a message to Jack that death is coming his way.

Meanwhile, a young woman named Carina Smyth has been sentenced to death for witchcraft because of her scientific knowledge of Astronomy and Horology. She manages to escape her cell and briefly runs into Jack, who is attempting to rob a bank with his crew. She seeks out Henry, who has also been sentenced to death for supposedly committing treachery aboard the vessel of the Royal Navy. She tells him she knows of a way to find the Trident of Poseidon. She helps him escape, but both she and Jack are captured and brought to the town square to be executed. Together with Jack’s crew, Henry helps them escape and they sail away on Jack’s ship, the Dying Gull. Carina reveals to them a map that will lead them to the Trident, and reluctantly decides to team up with Henry and Jack in order to achieve their goal; Carina and Henry grow closer as their adventure progresses. Salazar and his crew are able to break free from the Triangle in which they were trapped, and he forces Captain Barbossa into helping him track down and kill Jack. Salazar explains how he and his crew once sailed the seas to kill every pirate, until they ran into a young Jack Sparrow, before he was captain of the Black Pearl. Jack tricked them into sailing into the Devil’s Triangle, where Salazar and his crew died and were cursed to remain undead.

Soon, Salazar’s ship finds the Dying Gull. However, Jack, Henry and Carina escape on a rowboat while the crew remains on board to cause a distraction. Salazar and his crew chase Jack, but upon arriving at a small island, Jack realizes the ghost crew can’t set foot upon land. Barbossa comes after Jack instead, but decides to help him, and breaks the Black Pearl and its crew out of the bottle in which it had been trapped by Blackbeard. Together, the crew sail away and soon arrive at the location of Poseidon’s Trident, a small uncharted island. A battle ensues between the Black Pearl and Salazar’s ship, and Henry is captured by Salazar. Jack, Carina and Barbossa find the Trident, hidden at the bottom of the ocean. Salazar, possessing Henry, fights Jack and impales him with the Trident. Henry, now free of Salazar, realizes that destroying the Trident will break all curses upon the sea. He destroys the Trident, returning Salazar and his crew to the living. Jack, Henry, Carina and Barbossa are then pulled up to safety by the anchor of the Black Pearl. Salazar, still intent on killing Jack, grabs onto the anchor. Barbossa, who has realized that Carina is his daughter, reveals his identity to her and sacrifices himself to take down Salazar, ensuring safety for his daughter and the others. Safe aboard the Black Pearl, Carina declares to Henry that her last name is no longer Smyth, but will be Barbossa.

Some time later, Henry is joined by Carina as they watch his father finally set foot on land again, no longer bound to the Flying Dutchman. As Henry and Carina declare their love with a kiss, Will is reunited with his wife Elizabeth. Watching from the deck of the Pearl, Jack sails away with his crew, joined by Jack the monkey.

In a post-credits scene, Will and Elizabeth are asleep when their bedroom is entered by a silhouette of Davy Jones. Will awakens and assumes this as a nightmare, oblivious to the presence of barnacles on the floor.