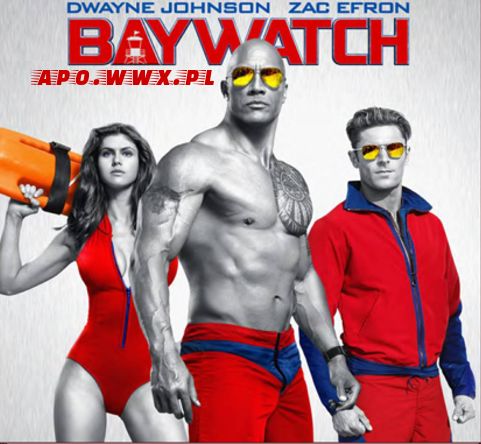 PLOT –  In Emerald Bay, Florida, Lt. Mitch Buchannon and his team of lifeguards, including second-in-commmand Stephanie Holden and veteran C.J. Parker, protect the beaches and the bay as part of an elite division known as Baywatch. Having made over 500 rescues in his career, Mitch is beloved by the community, to the annoyance of local beat cop Garner Ellerbee and Mitch’s superior, Captain Thorpe. During one of his morning patrols, Mitch discovers a small pouch of drugs washed up near the Huntley Club, which is now under the ownership of businesswoman Victoria Leeds.

At the upcoming tryouts for new lifeguards, three people stand out: surfer Summer Quinn, an old friend of Holden’s, Ronnie, a chubby nerd with a crush on C.J., and Matt Brody, a former Olympic swimmer who fell from grace after vomiting during a race and now has to perform community service as part of an unspecified plea deal. Quinn and Ronnie both pass the trials, but Brody refuses to do so and insists that his celebrity alone entitles him to a place on the team. Despite Brody demonstrating his abilities by assisting in the rescue of a drowning woman and her son, Mitch complains to Thorpe that he is unfit. Thorpe, in turn, insists that rehabilitating his image is necessary to convince the city not to further cut Baywatch’s funding.

As Brody begins his training under Mitch, it becomes clear that he is developing a crush on Quinn. The team is called into action when a private yacht catches fire, during which Brody disobeys orders and dives directly under the flames, causing him to nearly drown before Holden and C.J. save him. Most of the boat’s occupants are saved, with the exception of a deceased man identified as a city official. When Mitch tries to investigate his body, Ellerbee shows up and informs him that he is not a cop and has no business trying to solve a crime. Brody makes it clear that he agrees, which causes a rift between him and the other lifeguards who support Mitch.

At a party held by Leeds, Brody botches his role as lookout by getting drunk; Mitch retaliates by humiliating him in front of the crowd. Brody, who is effectively broke and homeless because of his poor life choices, goes to him the next morning and begs for a second chance. Mitch agrees and takes him and Quinn to infiltrate the city morgue, where they record two of Leeds’ men planting a falsified autopsy report to cover up the fact that the councilman was murdered on her orders. Unfortunately, they are discovered, and though Mitch manages to subdue and capture one of them, the recording is destroyed and Ellerbee is forced to release their suspect on a lack of evidence. Angered, Thorpe threatens to fire Mitch if he oversteps his authority again.

Convinced that Leeds is running drugs out of the Huntley, Mitch and Brody go undercover and sneak into the club kitchen, where they witness her workers retrieving the drugs from barrels of fish and processing them. They contact Ellerbee, only to learn that another body has been found on the beach. Thorpe, enraged that Mitch essentially deserted his post, fires him and names Brody as the new lieutenant. Brody accepts the job reluctantly, and Mitch takes a job as a cellphone salesman.

After finding another pouch of drugs on the beach, Brody steals the second victim’s report from Ellerbee and brings it to Quinn, who confirms his suspicion that the man was murdered. Ronnie, upon recognizing the victim as his friend Dave, helps Brody hack into Leeds’ servers, revealing her plan to privatize the entire beach by systematically buying out or eliminating every competing business owner.

The team infiltrates a private party on Leeds’ personal yacht, discovering how she’s been using the hull to smuggle the drugs. Brody is captured and placed in a bait cage to be drowned, and a gloating Leeds reveals that she bribed the corrupt Thorpe to set Mitch up so he could justify firing him before pushing the cage into the water. Just before Brody drowns, Mitch appears and saves him.

The two catch up to Leeds, while Ronnie and C.J. use fireworks to prevent her escape helicopter from landing. Just as they run out, a wounded Mitch, having intentionally stung himself with a sea urchin to boost his adrenaline, uses a Roman candle to blow Leeds up, saving Brody once again. Ellerbee arrives and takes Thorpe into custody, apologizing to Mitch for doubting him.

In the aftermath, Mitch formally inducts Quinn, Ronnie, and Brody into Baywatch and introduces their new captain: Casey Jean.