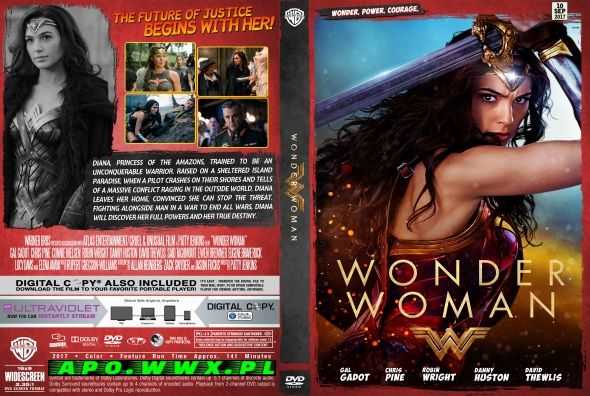 PLOT: In present-day Paris, Diana Prince, a staff member of the Louvre’s antiquities department,[6] receives a World War I-era photographic plate sent by Bruce Wayne and recalls her past.

Diana was born and raised on the island of Themyscira, home to the Amazons, a race of warrior women created by the gods of Mount Olympus to protect humankind against the corruption of Ares, the god of war. In the distant past, Ares slew all his fellow gods, but was mortally wounded by his father Zeus. Before dying, to guard against Ares' return, Zeus left behind a weapon for the Amazons capable of killing his renegade son—the „Godkiller,” which Diana believes to be a ceremonial sword. Diana desires to train as an Amazon warrior, but her mother Queen Hippolyta refuses to allow it, insisting that Ares will never return. However, Diana and her aunt, General Antiope, disobey Hippolyta and begin training in secret. When the two are discovered by Hippolyta, Antiope convinces the queen to allow Diana’s training to continue.

As a young woman, Diana rescues pilot Steve Trevor after his plane crashes off the coast of Themyscira. The island is soon attacked by the German soldiers pursuing Steve. The Amazons engage and kill all the soldiers, but Antiope dies protecting Diana. Interrogated with the Lasso of Truth, Steve reveals that the Great War is well underway, and he is an Allied spy. He stole a notebook from German scientist Doctor Maru, who is researching a deadlier form of mustard gas under General Erich Ludendorff. Believing Ares is responsible for the war, Diana arms herself with the ceremonial sword and leaves Themyscira with Steve to find and destroy Ares.

In London, Steve delivers Maru’s notes to his superiors at the Imperial War Cabinet, including Sir Patrick Morgan, who is trying to negotiate an armistice with Germany. Steve believes Ludendorff will complete and use the gas regardless of an armistice. With Sir Patrick’s support, Steve and Diana infiltrate the Western Front in Belgium, accompanied by Steve’s team: spy Sameer, marksman Charlie, and smuggler Chief. Their group’s progress is halted by enemy trenches, until Diana pushes alone through the German lines, rallying the Allied forces behind her to liberate a village. The team briefly celebrate, have a group picture taken (the photographic plate that was shown earlier in the film) and Diana grows close to Steve.

The team learns that Ludendorff will attend a gala at a nearby castle. Steve infiltrates the party, intending to follow Ludendorff to the weapon storage. Diana, however, believes Ludendorff is Ares and that killing him will end the war. Steve stops her to avoid jeopardizing the mission. Ludendorff gasses the village the team liberated earlier, killing everyone. Diana blames Steve for the loss of lives. She pursues Ludendorff to a complex where the gas is being loaded into a bomber bound for London. Diana fights and kills Ludendorff, but is shocked when his death does not stop the war.

Sir Patrick appears, revealing that he is actually Ares. He tells Diana that although he has subtly given humans ideas and inspirations, it is ultimately humankind’s decision to cause war and violence. After destroying the ceremonial sword, Ares reveals that Diana is the true „Godkiller”: she is Zeus' youngest child, and thus Ares' half-sister. Ares attempts to convince Diana that humanity is inherently corrupt, and that she should join him and help destroy humankind. While the gods fight, Steve hijacks the bomber carrying the gas and sacrifices himself to incinerate it at a safe distance. Inspired by Steve’s selflessness and his final words, Diana summons her power and overpowers and destroys Ares. Back in London, the team solemnly celebrates the end of the war.

In the present day, Diana sends an e-mail to Wayne thanking him for the photographic plate of her and Steve and reaffirms her mission to protect all life as Wonder Woman.