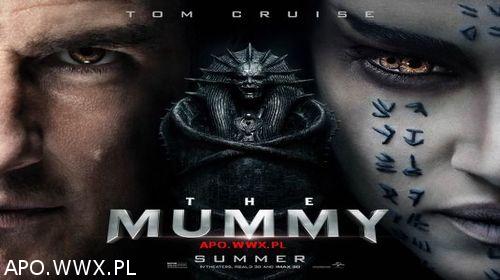 PLOT In ancient Egypt, Princess Ahmanet is first in line to replace her father Pharaoh Menehptre only to be replaced when his new wife gives birth to a son. Determined to usurp the throne, Ahmanet sells her soul to the dark god Set, who promises to make her Queen in exchange for gaining a corporeal form. After killing her family, Ahmanet prepares to sacrifice her lover only to be captured and condemned to be buried alive with flesh-eating scarabs.

In present day Iraq, soldier-of-fortune Nick Morton and his team accidentally discover the tomb of Ahmanet while fleeing from groups of armed thieves. Nick and his team bring the tomb aboard their own airplane, and attempt to travel out of Iraq. During the flight, a huge wave of crows assault the airplane, killing everyone on board and causing the plane to crash. Nick revives a day later, and is greeted by Dr. Henry Jekyll, the head of Prodigium, a secret society dedicated to hunting supernatural threats whose base is under the Natural History Museum of London. He tells Nick that he was chosen by the Princess to become what appears to be the key to her conquest of the Earth, which is why he survived the plane crash.

Ahmanet uses her vast supernatural powers to free herself and to escape from the hands of Prodigum, wreaking havoc, death and destruction in the process. Dr. Jekyll who attempted to stop her from escaping, fails, and transforms into Edward Hyde, his murderous alternative personality, forcing Nick to fight him. After regressing to his original personality, Jekyll tells Nick that he is the only one who can stop Ahmanet, and joins him with his assistant Jennifer „Jenny” Halsey.

Ahmanet arrives in London, using her powers to raise an army of undead and creating a sandstorm that ravages the city, slaughtering thousands in the process. During the battle, she captures Jenny and drowns her. Seeing her dead, Nick sacrifices himself and commits suicide with a ceremonial dagger. His body is possessed by Set, who proceeds to join Ahmanet to uphold his end of the bargain until he sees Jenny’s dead body, at which point Nick regains control of his body and uses Set’s powers to suck the life out of Ahmanet and defeat her once and for all.

Nick uses Set’s powers to resurrect Jenny, saying goodbye before becoming overwhelmed by Set’s power and disappearing. Soon, Jenny links up with Dr. Jekyll and they discuss if Nick, now fused with Set, is good or evil and whose side he is on. It is also revealed that Nick has resurrected his friend Vail, who protests as to what they will do now, to which Nick responds, „Where is your sense of adventure?” The two ride off in the desert as a sandstorm trails behind them.