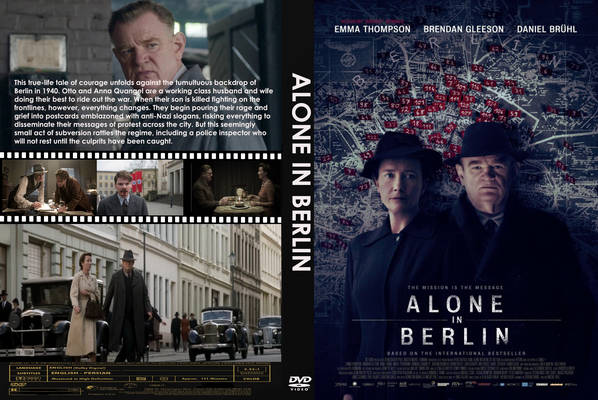 PLOT – In 1940, a working-class couple in World War II-era Berlin, Otto and Anna Quangel, decide to resist Adolf Hitler and the Nazis, after receiving the news of the death of their only son. An additional impetus for their growing resistance to the regime is the fate of an old Jewish woman living in their building. Though the official deportation of Jews to death camps had not yet started, Jews have no recourse to any legal protection. Ruthless Nazis — and „non-ideological” common criminals — use the opportunity to loot the old woman’s apartment with impunity. Despite the efforts of the Quangels’ and other kind neighbors to help her, the persecution ends with the old woman jumping to her death from a high floor window.

Impelled by all this, the couple starts writing postcards to urge people to stand against Hitler and the Nazis and protest against them, and furtively placing the cards in public places.[3]At first, Otto wants to do it all by himself, warning Anna, „They hang women, too!” She, however, insists on taking part in this dangerous activity. While in the beginning of the film the couple’s marriage seems to have dried up, being unable to console each other for the loss of their son, their shared risk and commitment brings them back closer, in effect falling in love with each other all over again.

Escherich is the police inspector charged with finding the source of the postcards.[4] He is a professional police detective, acting out of professional pride rather than Nazi ideology. During three years of painstakingly gathering clues about the „Hobgoblin” (as he calls the mysterious writer of the postcards) he develops an increasing respect for this elusive unknown opponent. With the lack of progress in his investigation, Escherich is beaten up by the obviously impatient S.S. senior officer, and is further forced thereby, to execute extrajudicially, a man whom he is certain has no connection with these subversive postcards.

Finally, Otto Quangel is arrested due to the accidental fall of postcards out of his pocket, while at work. He remains though stoic about the certain death sentence awaiting him, and only tries in vain to take all the blame on himself and save Anna. After the couple has been executed, Escherich is alone in his office. He gathers up all of the couple’s hundreds of subversive postcards, scatters them out of the open window of the police headquarters, and shoots himself. The film ends with the image of the postcards swirling in the wind, falling down on the Berlin streets and picked up by passers by — giving the film’s protagonists a posthumous moral victory.