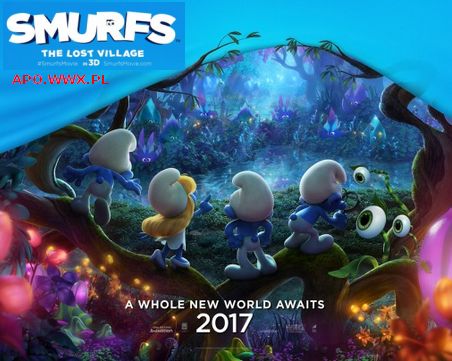 PLOT: In Smurf Village, the Smurfs live peacefully among themselves. Their leader is the wise, elderly, and a bit overprotective, Papa Smurf. Some of the Smurfs include the klutzy and slow-witted Clumsy Smurf, the intelligent and eccentric Brainy Smurf, the strong and gutsy Hefty Smurf and the beautiful Smurfette, who feels out of place in Smurf Village as the only girl. Smurfette was created by the wicked wizard Gargamel from a lump of clay, but was redeemed by Papa Smurf and became part of the village. Gargamel makes it his mission to capture the Smurfs, steal all of their essences, and become the most powerful wizard in the world.

After Smurfette accidentally breaks an invention by Brainy, made up by a fun day snowboarding with Brainy, Hefty, and Clumsy, Smurfette sees a blue creature hidden by a leaf and follows it straight into the Forbidden Forest, which Papa Smurf forbids the Smurfs from entering, believing the creature to be a Smurf. She loses sight of the creature but she discovers a hat that was dropped by the possible Smurf. Smurfette ends up being captured by Gargamel and at his castle, she ends up inadvertently revealing the hat, enabling Gargamel to mix up a brew that causes him to locate the village on a map. Soon enough Hefty, Brainy, and Clumsy, who followed Smurfette, help her escape and return to Smurf Village, where they end up being punished by Papa Smurf for disobeying his orders and he confines them to their houses while dismissing their claims of a lost village filled with Smurfs.

However, Smurfette, still wanting to find her place, sneaks out into the night, with Brainy, Clumsy, and Hefty volunteering to come with her, simply because they’re Team Smurf. Smurfette agrees to let them join her and together they enter the Forbidden Forest. Gargamel soon discovers them trying to find the lost village and heads out with his cat Azrael and giant bird Monty to stop them. The four best friends follow the map and end up in various adventures, such as being attacked by monster flowers and getting caught in a stampede of luminescent rabbits, one of whom they befriend and name Bucky, who helps them on their quest. After setting sail on their handmade raft along the river, they encounter Gargamel, Azrael, and Monty. Following a brief chase, Gargamel is thrown out of his own raft. Hefty and Smurfette convince the others to help save him. They do so but instead of thanking them, he pushed them out of their raft, leaving them to plunge down a waterfall.

Meanwhile, back at Smurf Village, Papa Smurf tries to reconcile with Smurfette over his actions on the previous night but soon discovers that she, Brainy, Hefty, and Clumsy are gone, so he sets out to find and set things right with them. Team Smurf survives the waterfall and washes ashore where they are soon captured by the leaf-covered creature from earlier along with a few others who reveal themselves to be female Smurfs. They are taken to their village, which is called Smurfy Grove, in the trees where they meet the leader Smurf, Willow, the tough tomboy Smurf Storm, the hyperactive Smurf Blossom, the gentle Smurf Lily and the music-loving Smurf Melody. They all welcome the Smurfs, especially Smurfette, to their humble home. After a while of showing them what they do, Smurf Storm and Clumsy come back with her telling that Smurfette was created by Gargamel. The female smurfs prepare an attack that night but instead of Gargamel, Papa Smurf appears, and the female Smurfs accept him into their home. As Papa Smurf and Smurf Willow argued and flirted with each other Gargamel comes and destroys Smurfy Grove, captures all the Smurfs, except Smurfette, who is now alone, feeling guilty for her actions. However, Brainy’s pet Snappy bug shows her a picture of her and the others, and she soon realizes that she is not a real Smurf, and heads back to Gargamel’s lair with Snappy and Bucky to save the Smurfs.

At Gargamel’s lair, Brainy makes a plan to escape. Papa Smurf hears their plan and he and Smurf Willow decide to help them. Hefty, Brainy, Clumsy, and some of the female Smurfs succeed at the plan until Gargamel and Azrael spot them and put some of the female Smurfs and Clumsy into his Smurfilator, extracting their essence. Smurfette appears, tricking Gargamel into believing that she wants to be an evil smurf again. When Gargamel tries to turn Smurfette into an evil smurf, he realizes that Smurfette is absorbing his magic powers instead, a skill she found earlier after destroying Brainy’s invention. The lair explodes, sending Gargamel, Azrael, and Monty into a lake full of piranhas. Unfortunately, Smurfette has reverted to her original lifeless clay form. Papa quickly tries to find a spell, but Brainy states there is nothing they can do to save her, leaving everyone, especially Papa, heartbroken.

Back at Smurf Village, all the Smurfs mourn the loss of Smurfette. Using their energy, Smurfette comes back to life and becomes a Smurf again and everybody happily celebrates. After which, Smurf Village and Smurfy Grove become united with each other and Smurfette finally finds her purpose, becoming a new leader of the Smurfs and most of all, true-blue Smurf.