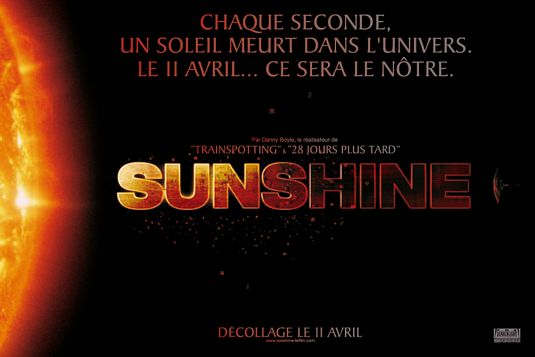 PLOT: In 2057, the sun is dying and the Earth is freezing. A ship named Icarus I, has been sent with a massive stellar bomb intended to reignite the sun, failed on its missions seven years ago for reasons unknown. A crew of eight pilot a colossal nuclear bomb aboard the spaceship Icarus II in a final attempt, as all of the Earth’s fissile materials have been mined for the bomb. As they slingshot past Mercury, Icarus II discovers the distress beacon of Icarus I, the first ship to attempt their mission, which disappeared seven years earlier. Reasoning that two bombs have a better chance of success than one, physicist Capa recommends Captain Kaneda change course and commandeer Icarus I. Mace, the ship’s engineer, opposes the deviation as risky. Navigator Trey calculates a trajectory to intercept Icarus I, but forgets to realign the shields that protect the ship from the sun, causing damage to four shield panels.

Kaneda and Capa embark on a spacewalk to make repairs, assisted by Pilot Cassie, who angles the damaged portion of the shield away from the sun. The angle however allows the sun to destroy the ship’s oxygen garden and oxygen reserves. As Icarus II’s autopilot returns the shield to its original alignment, Kaneda orders Capa to safety and repairs the last panel, moments before he’s immolated. Trey blames himself for the loss of Kaneda, and psychiatrist Searle assesses him as a suicide risk, sedating him.

Icarus II docks with Icarus I. Capa, Searle, Mace, and former communications officer now-Captain Harvey search the vessel, leaving Cassie and botanist Corazon on board Icarus II. They discover Icarus I’s mainframe has been sabotaged, making its bomb delivery impossible. In the ship’s log is a rambling message from Captain Pinbacker, who abandoned his mission. The crew of Icarus I is found charred to death in the solar observation room, where they were long ago exposed to the un-shielded sun. Suddenly, the two ships explosively decouple, destroying Icarus I’s outer airlock, stranding the four crew members on it. Mace suggests one crew member stay behind to manually operate the airlock while the other three jettison between airlocks, using the vacuum release for propulsion. Searle volunteers to stay behind. Capa is sealed in the only space suit, while Harvey and Mace wrap themselves in salvaged insulation material. Searle releases the airlock and the three crew members rocket into space. Harvey misses the airlock and freezes to death, while Capa and Mace make it back to Icarus II. Searle, having spent the entirety of the mission obsessed with looking into the sun, voluntarily exposes himself to its full, deadly force in the observation room.

Corazon calculates that there is enough oxygen left for four of the five survivors to reach the sun. After a contentious vote, Mace decides to kill Trey, but discovers Trey to have already committed suicide. Capa learns of a stowaway on-board and discovers an insane and disfigured Pinbacker. Pinbacker attacks Capa and locks him in an airlock. He then kills Corazon, and removes the mainframe from its coolant bath, shutting down the computer. Pinbacker pursues Cassie, who flees into the bomb payload.

Mace attempts to manually lower the computer back into the freezing coolant, but when his leg catches on the descending computer he becomes trapped, and the computer disabled. As he freezes to death, he radios Capa to escape the airlock, decouple the bomb from the ship, and activate it as it plummets into the sun, delivering the payload to its destination. Capa blows the airlock, separates the bomb from the ship, which explodes, and enters the payload, where he finds Cassie. Pinbacker ambushes them, telling them God ordered him to send all humanity to Heaven. As they hurtle into the sun, Capa escapes Pinbacker while Cassie dies, reaching the bomb controls. Not sure if it will work under these extreme conditions, he watches as the bomb begins to successfully ignite, at the edge of the sun itself.

Back on Earth, on the frozen Sydney Harbour, Capa’s sister and her children witness the sun returning to its full power, implying the success of the mission.