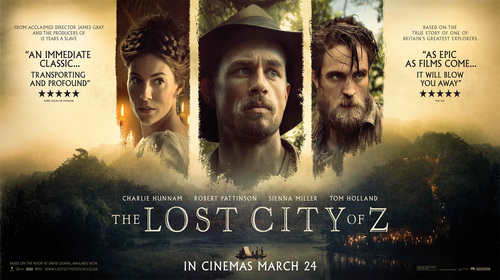 PLOT: In Ireland in 1905, Percy Fawcett is a young British officer participating in an elk hunt on an Irish baronial estate for the benefit of the visiting Archduke Franz Ferdinand of Austria. A skilled horseman and marksman, he brings down the elk swiftly but is snubbed at the after-hunt party. A year later, Fawcett is sent to London to meet with officials of the Royal Geographical Society. The governments of Bolivia and Brazil are nearly at war over the location of their mutual boundary, and have asked the British government to survey it. Fawcett agrees to lead the survey party to restore his family’s good name. On the ship to Brazil, Fawcett meets Corporal Henry Costin, who has knowledge of the Amazon rainforest. At a large rubber plantation in the jungle owned by the Portuguese nobleman Baron de Gondoriz, the two meet Corporal Arthur Manley, who tells them that the British government advises against further exploration. Fawcett, with several guides and the Amazonian scout Tadjui, complete the mission. Tadjui tells Fawcett stories about a city in the jungle covered in gold and full of people. Fawcett dismisses such stories as insane ravings, but discovers highly advanced broken pottery and some small stone statues in the jungle that convince him Tadjui’s story was true.

Fawcett is praised after his return to England, where his wife, Nina, has given birth to their second son. In the Trinity College Library, Nina discovers a conquistador text which tells of a city deep in the Amazon jungle. Fawcett meets the renowned biologist James Murray, who agrees to back Fawcett’s expedition to the Amazon to find what Fawcett calls „the Lost City of Z”. Fawcett attempts to convince the members of the RGS to back the expedition, but is publicly ridiculed. Nevertheless, the RGS backs the expedition to further exploration of the Amazon basin. Murray is unused to the rigors of the deep jungle, and slows the party down significantly. The Fawcett group is attacked while traveling along the river. However, Fawcett makes peace with the natives. Murray suffers a severe knee injury which becomes infected, and he begins to go mad. Fawcett sends him off with a native guide and the group’s last pack animal to find aid. Fawcett’s team completes their survey, but are unable to find the lost city.

Murray survives, and accuses Fawcett in front of the RGS trustees of abandoning him in the jungle. Fawcett resigns from the society rather than apologize. World War I breaks out in Europe, and Fawcett goes to France to fight. In the Battle of the Somme, Manley dies in the trenches, and Fawcett is temporarily blinded during a chlorine gas attack. Jack, Fawcett’s eldest son who had long accused Fawcett of abandoning the family, reconciles with his father in the hospital.

In 1923, Fawcett is living in obscurity in England. American interest in exploring the Amazon has reached a fever pitch, primarily due to Fawcett’s stories of the lost city. John D. Rockefeller, Jr. and a consortium of American newspapers finance a new Fawcett expedition. The RGS co-funds the expedition at the last moment as a matter of British pride. Prior to departing, Fawcett hands Sir John Scott Keltie, a member of the RGS, a compass informing him that should he find the lost city, he will send the compass back. Percy and Jack intend to go alone this time, traveling as light as they can for up to three years in order to find Z. Fawcett invites Costin along, but he declines. Percy and Jack are attacked by natives and escape—only to run into an ambush by a second group of Amazonians. The second tribe declares that the spirits of the Fawcetts „must belong” to the tribe. Percy and Jack are drugged during a ceremony and carried away.

Years later, Nina Fawcett meets with Keltie, now the head of the RGS, claiming she has heard that Percy and Jack are alive and living with tribespeople. The RGS, having sent more than a hundred people to search for Fawcett over the last several years, declines to send another expedition. Keltie advises Nina to come to terms with her husband’s death, but she refuses. She shows Keltie a package, and on opening it, it contains the compass Fawcett had promised to send back if he found the city.