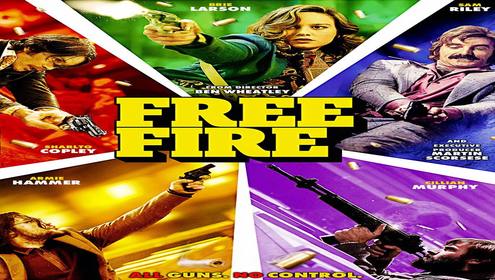 PLOT: Stevo and Bernie are driving to meet two IRA members, Chris and Frank. On the way, Stevo tells Bernie that he was beaten up the previous day by the cousin of a woman he abused. The group meet outside a Boston warehouse, where they wait with intermediary Justine. A representative arrives, Ord, who leads them inside. The group is there to buy guns from arms dealer Vernon and his associates, Martin, Harry, and Gordon. Despite tensions between the two groups and the fact that Vernon supplied the wrong weapons, Chris' group secure the weapons in a van and hand over the money in a briefcase.

Stevo notices that Harry was the one who beat him up the day before, and refuses to go near him, irritating Frank. Harry eventually notices and lashes out at Stevo, furthering the tensions between the group. Stevo seemingly apologizes, but then brags about what he did to Harry’s cousin. Infuriated, Harry shoots Stevo in the shoulder. Both groups split off and begin shooting at each other. Martin, who was holding the briefcase, is grazed by a bullet in the head. The briefcase now lies in the open, with Vernon attempting to coerce one of his men to get it.

Bernie is shot in the back by Harry and dies shortly after. Soon, two men with rifles begin shooting at both groups. One of them, Jimmy, is killed, the other is recognized by Ord as Howie, who reveals that he was hired to kill everyone and take the money. Before Howie can reveal who hired him, he is shot by Chris' group. Chris, defending Justine, requests that Vernon’s group let her go. Gordon crawls after her, intent on killing her.

As the shooting continues, a telephone rings in one of the offices. Realizing that they can call for backup, Chris sends the wounded Frank to the office, which prompts a wounded Vernon to go after him. Gordon chases Justine to the warehouse entrance, but she manages to kill him. As Chris, Ord, Stevo, and Harry engage in another shootout, Vernon kills Frank after he is severely burned in a trap.

Martin regains consciousness, and begins shooting at his own group. He reveals that Howie and Jimmy were working for him. He gets the briefcase, but dies from his injuries. After getting past Ord and Harry, Chris gets to the office and kills Vernon. Using the phone to call his associates, Chris is cut off by Ord while Harry distracts Stevo. Returning to the warehouse, Justine takes Jimmy’s rifle.

One of Chris' associates, Leary, enters the warehouse in search of his IRA comrades, but is killed by Harry. Taking the briefcase, Harry attempts to escape in the van, but Stevo fires at him. Harry runs over Stevo, but not before Stevo shoots him. The fire that Frank caused spreads and the sprinklers come on. Exhausted and out of bullets, Ord and Chris agree to stop fighting, take the money, and attempt to escape before the inevitable arrival of the police.

Justine shoots Ord in the head, accidentally shooting Chris as he was „in the way”. Chris talks with Justine, regretting having not known her better, and succumbs to his wounds. As Justine walks to the warehouse entrance, red police lights are seen, and she turns as the sounds of sirens become louder.