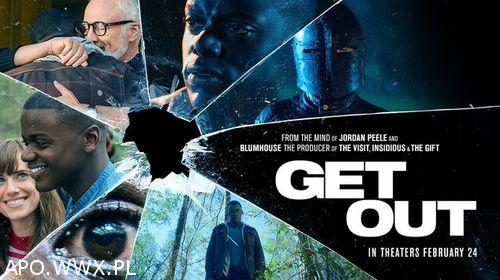 PLOT: After talking with his girlfriend on his cellphone, a black man named Andre Hayworth is abducted by an unknown assailant while walking through a suburb late at night.

Months later, black photographer Chris Washington and his white girlfriend Rose Armitage take a trip to meet Rose’s parents, neurosurgeon Dean and psychiatrist/hypnotherapist Missy, and her brother Jeremy. At the house, everyone tries to make Chris feel welcome, but he is disturbed by the odd behavior from the black groundskeeper and housekeeper, Walter and Georgina. That night Chris talks to Missy about his mother, who died in a hit and run when he was eleven. As they talk, Missy hypnotizes Chris into a paralytic state, sending his consciousness into a void that Missy calls „the sunken place”. Chris wakes up in bed the next morning and believes he had a nightmare, but later realizes that Missy has hypnotized him to quit smoking.

Guests arrive for the Armitages’ annual get-together, where various older white couples take an uncanny interest in Chris. He meets Logan King, a black guest whose bizarre demeanor and familiarity unsettles him. He calls his best friend, TSA Officer Rodney „Rod” Williams, whom he tells about his hypnosis and the unusual behavior of everyone. He later tries to stealthily take a picture of Logan with his phone, but its camera flash causes Logan to suffer a nosebleed, and then hysterically yell at Chris to „Get out!” Dean claims that Logan has suffered an epileptic seizure, but Chris is skeptical. Chris and Rose go on a walk, and he convinces Rose to leave with him. While they are away, Dean holds a mysterious auction, a picture of Chris on display, with Jim Hudson, a blind art dealer, placing the winning bid.

While packing to leave, Chris sends the picture of Logan to Rod, who recognizes Logan as Andre Hayworth, a past mutual acquaintance. Chris also finds dozens of photos of Rose in prior relationships, including Andre, all of whom were black, despite the fact Rose had previously told Chris he was her first black boyfriend. Alarmed, Chris tells Rose that they need to leave immediately, but the whole family — Rose included — blocks him. Chris tries to escape but is incapacitated by Missy’s hypnosis. Rod worries when Chris does not return or answer his calls, and discovers that Andre Hayworth went missing months ago. He goes to the police, but is derided.

Chris wakes up strapped to a chair, and is presented with a video that explains the family has perfected a method of pseudo-immortality in which Dean transplants the brains of his older friends and family into the bodies of younger people, selected by Rose and hypnotically prepped by Missy. Jim Hudson wants to use Chris as a host so he can regain sight, with Chris being doomed to exist in „the sunken place” for the rest of his life as Jim controls his body. When Chris asks „Why black people?”, Jim says that everybody has their own reasons, but black people are currently in fad. Seeing stuffing is protruding from holes in his chair, Chris uses it to plug his ears, blocking the hypnotic commands that render him unconscious. When Jeremy comes to collect him for the surgery, Chris escapes, killing Dean, Missy, and Jeremy.

As he drives away, Chris hits Georgina. Guilt over his failure to help his mother forces him to take the unconscious Georgina with him, but she soon awakens and attacks him, causing the car to crash. Georgina, whose body was the vessel for Rose’s grandmother, just as Walter’s is for Rose’s grandfather, is killed. Rose and „Walter” catch up with Chris, but Chris is able to use his phone’s camera flash to free the real Walter, as with Logan earlier. Walter takes Rose’s rifle and shoots her in the gut, then kills himself. Chris begins to strangle Rose, but cannot bring himself to kill her and stops trying just as an apparent police car pulls up. Rose cries out for help, hoping that Chris will be seen as the attacker, but the driver turns out to be Rod in a TSA vehicle. He and Chris drive away as Rose succumbs to her gunshot wound.