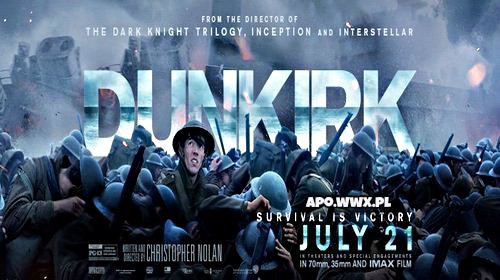 PLOT: The film is split into three parts – one taking place on land, one on the sea, and one in the air, which are presented in a non-linear narrative.

On land, a young British private, Tommy, walks the streets of Dunkirk with fellow soldiers. They quickly take fire from the enemy and eventually Tommy is the final survivor, having witnessed the remainders of his regiment being gunned down. He arrives at the beach of Dunkirk and meets Gibson, another young soldier, who appears to be burying a friend. The two form a silent friendship and eventually find a wounded man lying on the beach. Tommy and Gibson rush to get the man to a soon-to-be departing boat. Against the odds, they manage to get him on in time. Wanting to get home as soon as possible, the two hide, ready to climb aboard any boat willing to take them. However, before they can, a bombing comes in and hits the boat. The two manage to save Alex, a young soldier, from being crushed. The three manage to get on a boat that night, but it is again blown up by the Germans, Gibson saves Alex and Tommy from drowning and they find a way back to shore. The next day, they board an abandoned ship with the Scottish regiment and wait for the tide to rise and bring them out. However the boat is not within the perimeter and soon enemies begin shooting at it as target practise. When the tide eventually rises, so many bullet holes have been left in the ship that it cannot stay afloat. Alex then makes allegations that Gibson, who has remained mute throughout, is a German spy and must get off to balance the ship. Tommy defends him, but Gibson then reveals he is French, and had stolen the identity of the soldier he had buried earlier. The ship begins to go under and the troops evacuate, but as they do, Gibson gets tangled in a chain and drowns. Alex and Tommy eventually board Mr. Dawson’s boat and return home to a heroes welcome by citizens, even though Alex does not feel like one.

On the sea, a sailor who goes by Mr Dawson is giving up his boat to the Navy to evacuate soldiers from Dunkirk, he is helped by his son Peter and Peter’s curious friend, George. Mr Dawson decides against giving his boat to the Navy and decides to set sail by himself with the boys. The trio eventually find a shellshocked soldier, the sole survivor of a U-Boat attack. Thinking they are bringing him home, the soldier climbs aboard, but acts hostile to each one of them. Upon realising they are heading to Dunkirk, he attempts to turn the boat around, but in doing so, knocks George down onto the lower deck. Peter goes down to his wounded friend, who reveals that he can no longer see. When a spitfire plane goes down ahead of them, Mr Dawson insists on helping the pilot, Collins, who is stuck in the cockpit. With the help of Peter, Collins gets aboard the boat and Mr Dawson reveals that his eldest son was an RAF pilot. Mr Dawson later saves the lives of several soldiers, including Alex and Tommy, but one of them notes that George has now passed away. Peter decides against telling the shivering soldier about this, insisting that George will be okay. They eventually reach England and Mr Dawson is congratulated for the amount of men he saved as George’s body is carried off the boat. The local paper later labels George a „Dunkirk hero”.

In the air, three Spitfire pilots, Farrier, Collins and an unnamed third, approach Dunkirk. The unnamed third pilot is the first to go down at the hands of a Luftwaffe plane. Farrier and Collins continue onwards, and are successful in taking down a plane, but Collins' Spitfire is fired upon and he crashes into the sea. Farrier continues alone and later prevents the bombing of the majority of the boats at Dunkirk, getting applause from all the soldiers and even Commander Bolton, the highest ranking officer on the beach, despite running out of fuel. He later lands the plane, sets it on fire, and voluntarily is captured by the enemy, presumably to be sent to a prisoner of war camp.