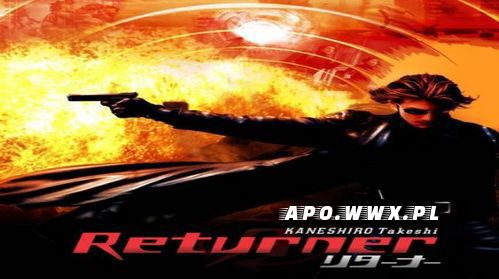 PLOT: Milly (Anne Suzuki) is a soldier from 2084, where humanity is on the verge of extinction because of the „Daggra”, an alien race. In mankind’s final stronghold in Tibet, Milly leaps into a newly built time portal just before the fortress is overrun. The portal sends her to 2002, where her mission is to kill the first Daggra, who faked a crash landing, and stop him from signaling his invasion fleet.

Milly lands in the aftermath of a shootout in Tokyo Bay, Yokohama, Japan, where a hitman named Miyamoto (Takeshi Kaneshiro) holds the murderous Triad mobster Mizoguchi (Goro Kishitani) at gunpoint. Her arrival allows the mobster to escape and Miyamoto takes Milly, who he thinks he accidentally shot, back to his place. She was saved by a plate of metal in her coat. She tapes a tiny bomb to his neck and threatens him into helping her on her mission. Miyamoto has a personal score to settle with Mizoguchi, who killed his childhood friend by kidnapping him and selling off his organs.

That night, Miyamoto sees Milly cleaning up his trenchcoat on a coat hanger, so he tells her to go back to sleep. The next morning he discovers photos of himself and a newspaper article on his death. He shows these to his weapons supplier Shi (Kirin Kiki), who tells him it’s an elaborate trick the Triads wouldn’t waste their time on.

With Shi’s help, they track down where the alien spaceship crashed, but it was taken away to the National Institute of Space Science. They try to get to the spaceship to kill the alien, but Mizoguchi arrives and tries to take the facility over. Milly is surprised at the alien, it is not what she expected. She hesitates to kill it as Mizoguchi advances on the lab.

Using Miyamoto as its mouthpiece, the alien says it wants to go home. Milly realizes that she has been lied to. The humans and not the aliens, started the war which has been destroying the human race. They started it when they captured and killed the alien. She now knows they have to stop Mizoguchi as he wants the alien technology to take over the world. Following the destruction of the Space Science lab, Mizoguchi and his goons take the alien and its ship. Meanwhile, Miyamoto and Milly regroup for the next part of her mission.

The duo again confronts Mizoguchi at an abandoned oil rig, where they rescue the alien. Surviving a huge explosion, a bloodied Mizoguchi threatens to kill them all for ruining his plans. However, his bullets hit an invisible force field. Miyamoto quickly grabs the gun and kills Mizoguchi. Before they can figure out where the force field came from a Daggra craft, disguised as a Boeing 747-400 airliner arrives, having received the alien’s distress signal. The Daggra take their wounded comrade and leave Earth. As the future war has ceased to exist, Milly slowly disappears.

Shortly after the incident, Miyamoto decides to give up his life of violence and hands in his guns to Shi. While walking home, he is confronted by a thug whose life he had spared earlier at Tokyo Bay. Realizing that he is weaponless, Miyamoto is helpless as the thug shoots him. The thug walks away, assuming that Miyamoto is dead. A little later, Miyamoto staggers up and finds his life was saved by a plate of metal similar to Milly’s. The plate has a written message by Milly, telling him she has repaid him. Miyamoto recalls the night Milly messed around with his trenchcoat. While Miyamoto and Milly were asleep, a second, future Milly traveled from the future and slipped the metal plate into his trenchcoat before returning to her timeline. On her way out, she accidentally drops the newspaper article on Miyamoto’s death.