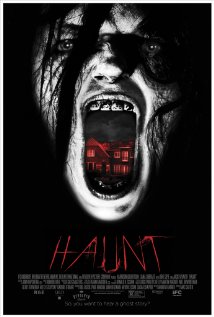 PLOT: The film begins with the narration of Mrs. Morello talking about her family and how they were murdered one by one by an unknown force. Then the scene shows Frank trying to speak to the dead people using a box and is mysteriouly killed by a ghost. When Evan Asher (Harrison Gilbertson) and his family move into the old Morello house, they are largely unaware that it has a history of death and grief. Soon after their arrival Evan begins to experience paranormal activity and enlists his neighbor Sam (Liana Liberato) to help uncover what is going on. As the two teens spend more and more time with each other, they begin to fall in love and find a box which is used to contact the dead. They use it to speak with the dead and it starts working. The ghosts of the previous owners continue haunting and the frightened Evan and Sam decide to burn the box and the belongings of the previous owners. They also seal the small room in their attic bedroom where the box was found. The ghost of a woman haunts them that night and locks the door. It is then revealed to Sam that the ghost is Kate. She and Frank the previous owner of the house had an affair and Kate give birth to a girl named Sam. Frank’s wife who is a Doctor finds out about the affair and brutally kills Kate while Frank watches helplessly with the newborn daughter. She is then buried in a small room in the attic, were Evan is staying now. Sam is the possessed by Kate who in turn kills Evan by stabbing him with a hammer saying „You shouldn’t have burned the box, you shouldn’t have closed the room”. Sam is caught by Evan’s father when she tries to open the wooden plank in the floor under which the body of kate is buried. She is arrested and taken by the cops. The movie ends with the voice of Mrs. Morello saying the house will now be haunted by Evan along with her family.