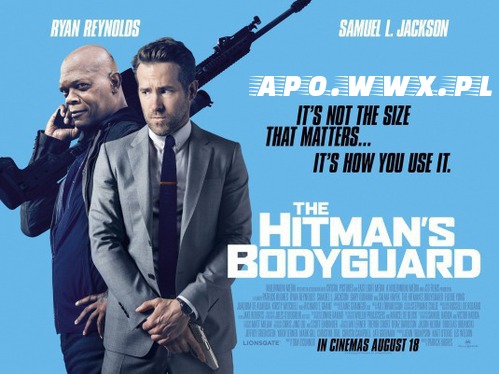 PLOT: Bodyguard Michael Bryce (Ryan Reynolds) is hired to protect Kurosawa, a Japanese arms dealer. All apparently goes well, until Kurosawa is shot in the head at the last minute. Two years later, Bryce has fallen into disgrace and ekes out a living protecting drug-addicted corporate executives. Meanwhile, Vladislav Dukhovich, the ruthless and bloodthirsty dictator of Belarus, is put on trial for crimes against humanity at the International Court of Justice. The prosecution is unable to make headway against him, as they are unable to substantiate their allegations with physical evidence and Dukhovich assassinates any witnesses who could do so. The prosecution’s last hope is notorious hitman Darius Kincaid (Samuel L. Jackson), who agrees to testify against Dukhovich in exchange for the exoneration of his wife Sonia, who is currently incarcerated.

Interpol Assistant Director Jean Foucher assigns Amelia Roussel, a greenhorn agent who is Bryce’s estranged ex-girlfriend, to lead a squad of Interpol agents tasked with escorting Kincaid to The Hague to testify. However, the convoy is ambushed in Coventry and everyone except Kincaid and Roussel is killed. The two retreat to a safehouse, where they deduce someone in Interpol must have betrayed them to Dukhovich. Realizing that they need someone who is completely unaffiliated with Interpol and can remain trustworthy, Roussel contacts Bryce. Bryce is reluctant to help, as he has had multiple conflicts with Kincaid in the past and believes that Roussel was responsible for the death of Kurosawa two years ago, but ultimately agrees to aid them in exchange for the restoration of his good name. Roussel returns to Interpol to update them on the situation while Bryce and Kincaid escape an attack by Dukhovich’s men.

Foucher approaches Dukhovich, revealing himself to be the traitor, and demands his payment for selling out Kincaid; Dukhovich stabs him in the hand and informs him he will only be paid when Kincaid is dead. Dukhovich’s men track Kincaid’s location through his cellphone and ambush him and Bryce. While they are able to fight them off, their vehicle is destroyed. The two hitchhike to a ferry terminal and take a ferry to Amsterdam, where Sonia is being held. Kincaid escapes from Bryce to send flowers to Sonia, and Bryce tracks him down and kills several more hitmen. Kincaid reveals that he killed Kurosawa two years ago, having shot him in order to collect the bounty on his head. Enraged at the revelation that he has spent two years blaming Roussel for „betraying” him when in reality the client’s death was a sheer fluke, Bryce abandons him.

As Bryce bemoans his failures, a group of hitmen attacks Kincaid. Bryce changes his mind and helps Kincaid escape, but is captured. Dukhovich’s men torture him in an attempt to find Kincaid, who tracks Bryce down and rescues him. The two battle their way to The Hague, arriving just in time for Kincaid to testify. He successfully proves that Dukhovich ordered the slaughter of a village; Dukhovich tried to hire Kincaid to assassinate a political rival, but in the process Kincaid witnessed the execution of a village, uploading photos of the massacre to a secret web site that he provides the court with access to. Dukhovich resorts to his backup plan; to bomb the court, allowing him to steal a gun and attempt to kill Kincaid. Bryce jumps in the way of the bullet and orders Kincaid to stop Dukhovich from escaping. Roussel notices Foucher acting suspiciously during the attack, and deduces he was the traitor. She subdues him with Bryce’s aid, and the two rekindle their relationship. Kincaid pursues Dukhovich to the roof of the building, where he attempts to escape by helicopter. Kincaid destroys the helicopter and corners Dukhovich. Dukhovich attempts to break Kincaid by claiming he will never be able to redeem himself for his sins, but Kincaid laughs it off, stating that he doesn’t care but that Dukhovich should not have shot Kincaid’s bodyguard, and then Kincaid kicks Dukhovich off the roof to his death. In the aftermath, Sonia is released, and Kincaid breaks out of jail to celebrate their anniversary, living happily ever after.