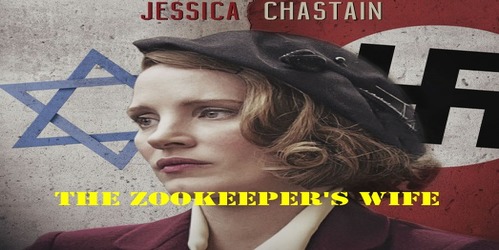 PLOT: Dr. Jan Żabiński (Johan Heldenbergh) and his wife, Antonina (Jessica Chastain), are the keepers of the Warsaw Zoo (Miejski Ogród Zoologiczny), one of the largest and most prolific zoos in 1930s Europe. In the calm of August 1939, Antonina rides her bicycle through the beautiful zoo grounds, greeting a hippo, horses, bison, and followed faithfully by Adam, a baby camel. Antonina opens the zoo gates with Jerzyk, another zookeeper. A crowd has already gathered to view the many species on display. Jan is the director of the zoo and faces the scornful, yet envious advances of a colleague, Dr. Lutz Heck (Daniel Brühl), the head of the Berlin Zoo and the man named by Adolf Hitler to be his chief zoologist.

On September 1, 1939, Antonina and her son Ryszard (Timothy Radford and later, Val Maloku) are shocked witnesses to the aerial bombardment of Warsaw as German forces storm Poland. The zoo is not spared; bombs raze the cages and kill many of the animals. Lions, tigers, monkeys and kangaroo take to the streets. As Polish resistance collapses under overwhelming odds, Lutz Heck arrives at the zoo, convincing Antonina to let him save her prize animals as a „loan.” He promises to return them to Warsaw when the war ends, which he believes will be soon. With the onset of winter, Heck comes back with Nazi soldiers, but this time he’s come to shoot the remaining animals, which he says will otherwise die in the cold. Something sinister has invaded Heck, revealed in the cold delight he takes in shooting an eagle, then casually telling an aide to have it stuffed. It becomes evident that Heck has begun to keep a subtle, romantic eye on Antonina.

Warsaw becomes the scene of monstrous upheaval. Jewish-owned shops are shuttered, and Jews are herded into the Ghetto. Wearing Star of David armbands, two of the Zabinskis’ friends, Maurycy Fraenkel (Iddo Goldberg) and his partner Magda Gross (Efrat Dor), seek a haven, not for themselves but for another friend’s notable insect collection. Antonina makes an unusual offer to shelter Magda in an attic closet. Jan and Antonina take stock of what defiance of the Nazis would mean, and how dangerous it would be: they can be shot simply for offering a Jew a glass of water. But they come to the realization that, in their zoo, they can save one life. Magda Gross is the first.

With the zoo to be closed permanently, Jan and Antonina seek out Heck, who has set up headquarters in Warsaw. The Zabinskis make a daring proposal to turn the zoo into a pig farm. Secretly, they hope to help Jews by bringing food into the Ghetto, but they tell Heck that, with pigs, they can help feed the German occupying forces. Intrigued, Heck is also looking for a home for his experiments on recreating ancient beasts as a symbol of the Reich. He agrees to the pig farm idea.

Jan begins retrieving garbage from the Ghetto to feed the pigs; the sights he sees there, of starving Jews, is shocking and unbearable. Jan begins to work with the Underground Army, to spirit Jews from the Ghetto to safehouses in other parts of the country. He sneaks them out in his garbage truck, taking them to the zoo, where they hide in animal cages, tunnels, and inside the Zabinski house. After some trepidation, Antonina agrees to help. It’s not easy for her at first, but she has a gift with frightened creatures and learns how to comfort even the most terrified people.

While trying to rescue a group of Jews, Jan discovers a young girl, Urszula (Shira Haas), who has just been raped by two Nazi guards. Jan hides Urszula in his truck and sneaks her into the zoo. She is traumatized and refuses to speak; she is like a feral animal. Antonina slowly draws her out by telling her the story of her own hard childhood, and by giving her a baby rabbit. Urszula eventually loses her fear and becomes part of the secret household of hidden Jews.

The Żabińskis continue to sneak Jews out of the Ghetto, hiding them in the zoo or disguising them as Aryan by bleaching their hair and taking them to safehouses. However, in 1942, the Nazis begin deporting Jews to the death camps. Jan is devastated to see young children being put into cattle cars, to be taken to the camps. They reach for his hand, leaving him no choice but to help them into a cattle car, beneath the eyes of German police.

In 1943, two women rescued by Jan and disguised as Aryan by Antonina are arrested and executed in a Warsaw street. Several months later, after a failed uprising, the Nazis announce their intention to liquidate the Ghetto. It will happen on Hitler’s birthday, which also falls on the first night of Passover. While the Jews in the zoo mournfully celebrate a secret Passover seder, with prayers and meager food, the Nazis burn down the Ghetto, killing any remaining Jews inside.

Several months later, Antonina has become pregnant and gives birth to a baby girl, whom Ryszard names Teresa. As Heck’s attraction to Antonina deepens, and as she struggles to fend him off while still guarding their secret „Guests,” Jan participates in the Warsaw uprising, in which he is shot in the neck and captured. Antonina has no idea if he is alive, or where he was taken.

In January 1945, with Soviet troops advancing and the Germans in retreat, the Nazis begin evacuating Warsaw. In a last attempt to find Jan, Antonina visits Heck to get his help. Heck refuses, revealing that he once heard Ryszard say „Hitler ist kaputt” and accusing Antonina of resistance activity. Heck attacks Antonina in a rage of sexual aggression. It is then that he realizes she does not want him, that she’s repulsed by him. She has been lying to him all along. Antonina escapes back to the zoo, warning her guests just in time for their escape. Magda takes baby Teresa with her as Antonina hides Ryszard in the basement, knowing Heck will come back. Heck arrives in a fury with his men, barging into the villa’s basement and discovering, at last, secret drawings on the walls: yellow stars and dates, and images of hidden Jewish guests drawn with animal faces. In raging retaliation, Heck chases Ryszard through the basement’s lion tunnel and outside again, seizing him at gunpoint.

Antonina begs Heck not to kill Ryszard but he drags the boy away. A tense beat; a shot rings out off-screen. Antonina collapses in sobs. And then Ryszard suddenly returns, victim of a cruel hoax. Lutz Heck leaves the zoo for good, and Antonina and Ryszard join the long march out of Warsaw, taking with them the rabbit and one of Heck’s test subjects, a young bison. As they leave their home and the city is liberated, they release the bison into the woods.

Four months after the Nazi surrender, Warsaw begins to be rebuilt. Antonina, Ryszard and baby Teresa return. The zoo is terribly damaged but still standing. Jerzyk, their loyal zookeeper, is there to greet them. Spring comes as they begin to rebuild, and with them, Urszula, Magda, and Maurycy. As birds return and life resumes, Antonina looks up to see Jan walking home, a survivor of a prison camp. Antonina runs into his arms.

In the film’s final moment, the Żabińskis paint Stars of David on all the cages in the zoo.

The Postscript tells us that 300 people were saved by the Zabinskis in their zoo. Lutz Heck returned to Berlin, where his zoo was destroyed by Allied bombings. His efforts to recreate extinct aurochs failed. The Żabińskis were eventually recognized by Yad V’shem for their righteous acts and defiance against the Nazis. The Warsaw Zoo remains open to this day.