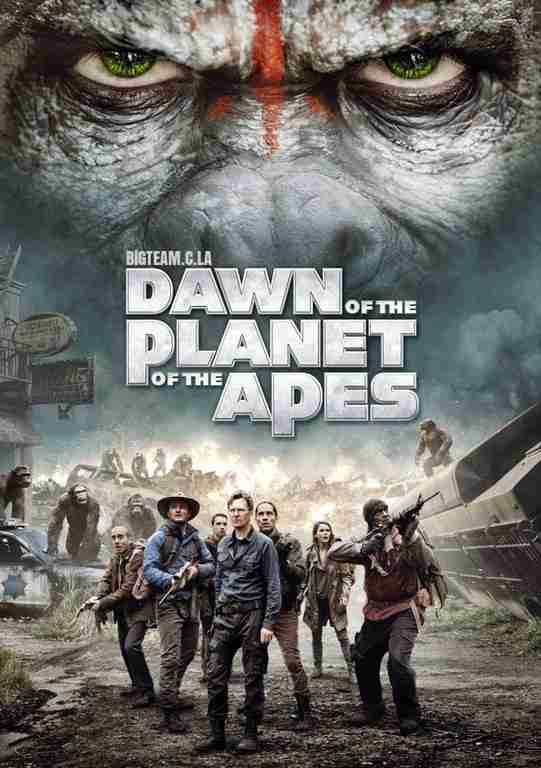 PLOT – Ten years after the worldwide pandemic of the deadly ALZ-113 virus, or Simian Flu, human civilization is completely destroyed all over the world. Over 99% of the human population has died in the pandemic, while apes with genetically enhanced intelligence have started to build a civilization of their own.

Near the ruins of San Francisco, Caesar leads an ape colony located in the Muir Woods. While walking through the forest, Caesar’s son Blue Eyes and his friend Ash encounter a man named Carver, who panics and shoots Ash, wounding him. Carver’s party, led by a man named Malcolm, arrive while Blue Eyes calls for the other apes. Caesar orders the humans to leave, and they flee to their community of survivors in San Francisco, who are genetically immune to the virus and living in a tower within the city. Prompted by Koba, a scarred bonobo who holds a grudge against humans for mistreatment, Caesar brings an army of apes to the tower, where he announces that while the apes do not want war, they will fight to defend their home. He demands that the humans stay in their territory.

Malcolm convinces his fellow leader Dreyfus to give him time to reconcile with the apes and gain access to a hydroelectric dam in their territory, which could provide long-term power to the city. Dreyfus, distrustful of the apes, arms survivors using an abandoned armory. Malcolm travels to the ape village, where he is taken to Caesar. After a tense discussion, Caesar allows Malcolm and the others to work on the dam’s generator on the condition that they surrender their guns. As Malcolm, his wife Ellie, and son Alexander work, they bond with the apes. Mutual distrust of both sides gradually subsides until Caesar discovers a gun Carver had smuggled and orders the humans to leave. But he later then allows the humans one extra day to work on the dam after Ellie uses medicine to treat Caesar’s ill wife Cornelia. Meanwhile, Koba discovers the armory and confronts Caesar, accusing him of loving humans more than apes. In response, Caesar severely beats Koba, but refrains from killing him; adhering to his philosophy that „ape not kill ape”. After recovering, Koba returns to the armory, where he kills two guards and steals an assault rifle. Returning home, he secretly kills Carver.

The dam is eventually repaired, restoring power to the city. During the celebration, Koba sets fire to the apes' home, then, unseen to anyone else, shoots Caesar, who falls from the settlement’s main tree. In the subsequent panic, Koba takes charge and, implicating Carver in the shooting, urges the apes to fight against the humans. He leads them into San Francisco, where they plunder the armory and charge the tower. Despite heavy casualties, the apes breach the building using a hijacked tank, and imprison the humans as Dreyfus flees underground. When Ash refuses Koba’s orders to kill unarmed humans, citing Caesar’s teachings, Koba kills Ash and imprisons all apes whom are still loyal to Caesar.

Malcolm’s group finds Caesar barely alive and transport him to his former home in San Francisco. Caesar reveals to Malcolm that Koba shot him, realizing that apes can be as corrupt and violent as humans. Malcolm leaves the group and heads to the city to find medical supplies for Caesar. He encounters Blue Eyes, who spares him and returns to the house with him, where he reconciles with his father. Blue Eyes then returns to the tower and frees the imprisoned humans and apes. Malcolm leads the apes into the tower from below. After accomplishing this, Malcolm finds Dreyfus, who informs him that his men made radio contact with survivors at a northern military base, who are on their way to help fight the apes. Caesar confronts Koba at the top of the tower, but as they fight, Dreyfus detonates C-4 charges he planted beneath the tower, killing himself and destroying the ape tower. Caesar overpowers Koba, who is left hanging over the edge of the tower. Pleading for his life, Koba reminds Caesar of his „ape not kill ape” philosophy, but Caesar rejects Koba as an ape, and lets go of his hand, causing Koba to plummet into the wreckage below to his death.

Malcolm informs Caesar of the impending arrival of human military reinforcements. Caesar tells Malcolm that the humans will never forgive the apes for the war they started and advises him to leave with his family for safety as the two of them acknowledge their friendship. As Malcolm disappears, Caesar stands before a kneeling mass of apes, awaiting the war to come.