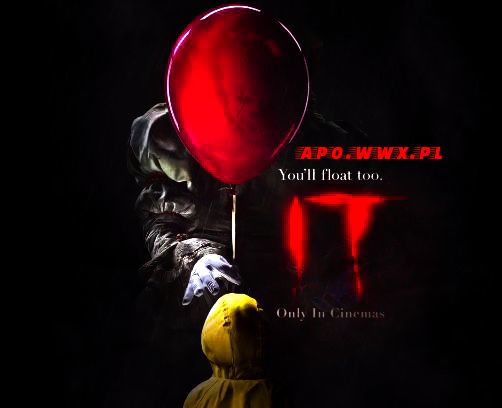 PLOT: On a rainy day in October 1988, Bill Denbrough gives his seven-year-old brother Georgie a sailboat made from notebook paper. Georgie takes the boat out onto the street and accidentally sails it down the gutter. As he peers into the drain, he meets a strange young man dressed as a clown, who introduces himself as „Pennywise the Dancing Clown”. Pennywise claims that the storm blew him into the sewers and offers Georgie a balloon. When Georgie reaches in to retrieve his boat, Pennywise grabs his arm and bites it off before dragging him into the sewer.

Eight months later, in June 1989, on the last day of term at Derry Middle School, Bill and his friends Richie Tozier, Eddie Kaspbrak, and Stanley Uris run afoul of bully Henry Bowers and his gang. At the same time, Beverly Marsh, a young girl abused by her father and bullied mercilessly for being a „slut”, runs into Ben Hanscom, a kind but overweight boy who secretly has a crush on her.

While making a delivery to a local butcher shop for his grandfather, homeschooled Mike Hanlon encounters Pennywise before nearly getting run over by Henry. Bill, still haunted by Georgie’s disappearance and the resulting neglect from his grief-stricken parents, discovers that his brother’s body may have ended up in a marshy wasteland connected by the sewers, known as the Barrens. Ben heads to the library where he finds a book on Derry’s history, learning the town has been plagued by mysterious unexplained tragedies and child disappearances for centuries. He is lured into the basement by Pennywise in the form of a headless boy, whom he narrowly escapes. The creature also goes after Stan in the form of a living painting, permanently traumatizing him.

Henry and his friends ambush Ben and torture him. Ben flees into the Barrens as the bullies pursue him, and Henry loses his switchblade in the process. At the same time, Bill, Richie, Eddie, and Stan discover the sneaker of a missing girl named Betty Ripsom whilst searching for Georgie. One of Bowers’s friends, Patrick Hockstetter, while wandering in the sewers looking for Ben, is killed by Pennywise. Ben stumbles across Bill and the other boys, who take Ben to the local pharmacy, where they meet and befriend Beverly. (Bill is smitten with Beverly due to them kissing in a play back in third grade.) On his way home, Eddie is attacked by Pennywise in the form of a rotting leper while passing an abandoned house on Neibolt Street. Beverly hears the voices of several missing children, including Patrick, coming from her bathroom sink. A clog of her cut hair ties her to the sink as she is covered in the erupting blood that coats the bathroom. Her father comes in to investigate and Beverly realizes that Mr. Marsh cannot see the blood. Bill is lured into the basement of his house by what he thinks is Georgie, actually a disguised Pennywise. Soon after, Bill, Beverly, Ben, Richie, Stan and Eddie discover Henry’s gang beating up Mike. They chase the bullies off with rocks and befriend Mike.

A few weeks later, the group, who now refer to themselves as „The Losers Club,” come to realize that they are each being terrorized by the same entity, which awakens for a short period of time every 27 years to feed on the children of Derry before returning to hibernation. While in Bill’s garage, the group deduces that Pennywise is using the sewers to move around unseen. After narrowly escaping an attack by Pennywise in Bill’s garage, the Losers Club go to the house on Neibolt Street where Bill deduces „It” to be hiding. The creature uses its shapeshifting abilities to separate the group and pick them off. Eddie breaks his arm after falling through a hole upstairs. Pennywise emerges from a fridge and prepares to eat him. The rest of the Losers arrive and save Eddie, and Beverly impales Pennywise through the head with a fence post. The clown slashes Ben before retreating down a well in the basement of the house. Eddie’s mother arrives and is horrified by her son’s broken arm, taking him away. The group begins to splinter, with Richie, Stan, and Mike succumbing to their fear and abandoning the others when Bill insists that they continue to hunt Pennywise.

One day in August, Beverly manages to subdue or kill her father with a porcelain toilet-tank cover when he attempts to rape her before Pennywise appears and abducts her. Bill uses the opportunity to reassemble the Losers and mount a rescue. „It” responds by giving Henry, who is gradually becoming insane, his missing switchblade while compelling Henry to murder his abusive father before sending him to intercept the Losers. At the Neibolt house, Henry arrives and tries to kill Mike. During the struggle, Mike pushes Henry down the well, where he seemingly falls to his death. Pennywise traps Stan and starts to eat him, but the others chase him off. They then find Pennywise’s lair in a underground cooling tower, containing a mountain of circus props and children’s belongings, where they find a catatonic Beverly floating with the bodies of the other missing children kept in a form of suspended animation. After the group pulls Beverly to the ground, Ben kisses her, restoring her to consciousness. „It”, in the form of Georgie, attempts to deceive Bill but fails, transforming into Pennywise and attacking the group. Taking Bill hostage, Pennywise offers to spare the other Losers if they sacrifice their friend. Instead, they break Bill free and together, brutally fight Pennywise as a group and defeat him. Bill coldly tells Pennywise that he is the one who is now afraid and starving as the Losers no longer fear him. Knowing he has no more power over them, a disintegrating Pennywise escapes into a deep pit and the floating children float back into the ground. Upon discovering Georgie’s yellow raincoat, Bill accepts his brother’s death and emotionally breaks down, while the others comfort him.

One month later, Beverly informs the group of a vision she had while catatonic, where she saw them fighting Pennywise as adults. The Losers form a blood oath that they will return to Derry in 27 years if Pennywise returns, and destroy him once and for all. After the other Losers depart one by one, Beverly tells Bill that she is moving to live with her aunt in Portland the following morning. Before Beverly leaves, Bill reveals his true feelings and they kiss.