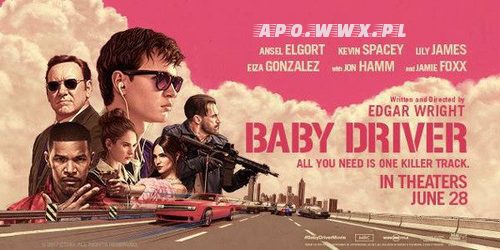 PLOT: Baby is a getaway driver in Atlanta, Georgia. He ferries crews of robbers assembled by Doc, a heist mastermind, to pay off a debt he incurred after stealing one of Doc’s cars. When he was a child, a car accident killed his parents and left him with tinnitus, which he blocks out by listening to music on various iPods. Between jobs, he creates remixes from snippets of conversations he records, while caring for his deaf foster father Joseph. While visiting a local diner, he meets a waitress named Debora, and the two start dating.

His next robbery goes awry after an armed bystander chases them down, but Baby evades him and the police. Informed by Doc that they are now „straight”, Baby quits his life of crime, delivering pizzas. During a date with Debora at an upscale restaurant, he is threatened by Doc into performing another heist at a post office.

The crew consists of easy-going Buddy, his wife Darling, and trigger-happy Bats, who takes an immediate dislike to Baby. While the crew attempts to purchase illegal arms for the job, Bats realizes the dealers are ex-police and opens fire, killing them all. Afterwards, Bats forces Baby to stop at Debora’s diner, unaware of Baby and Debora’s romance, and nearly kills her in a hold-up.

Doc, furious at the botched deal, tries to cancel the heist, but Baby convinces him to go through with it. He attempts to flee later that night, hoping to take Debora and leave Atlanta, but is stopped by Buddy and Bats, who have discovered his recordings and believe he is an informant. When they and Doc hear his mixtapes, they are convinced of his innocence.

During the heist, Bats kills a security guard. Disgusted, Baby refuses to drive the crew, causing Bats to beat him. Baby rams the car into rebar which impales Bats, killing him. The three flee the police on foot. After police kill Darling, Buddy blames Baby for her death, and vows to kill him. Baby steals another car and flees to his apartment. After leaving Joseph at an assisted living home, Baby drives to Debora’s diner to pick her up, where he discovers Buddy waiting. Baby shoots Buddy and flees with Debora as the police close in.

Baby seeks help from Doc, who initially refuses to help. After seeing he truly loves Debora, Doc supplies them with cash and directions to get out of the country. Buddy ambushes them in the parking garage and kills Doc with a stolen police car. A cat-and-mouse game ensues until Buddy has Baby at his mercy. Debora disarms Buddy with a crowbar and Baby shoots him with the pistol, causing him to fall to his death.

Fleeing Atlanta, Baby and Debora run into a roadblock. Debora prepares to ram it, but Baby stops her and surrenders, telling her she is not a criminal. At his trial, Joseph, Debora, and several people Baby saved during the robberies testify in his defense. Baby is sentenced to 25 years in prison with a parole hearing after five. Baby receives postcards from Debora who promises to wait for him. Eventually, Baby is released, and finds Debora waiting, as she promised. They kiss.