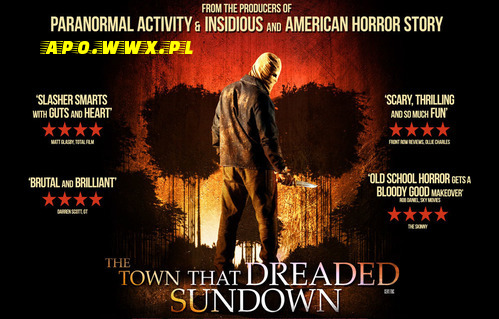 PLOT: On October 31, 2013, in the small town of Texarkana, the local drive-in theater is hosting the Halloween annual showing of the 1976 film ‚The Town That Dreaded Sundown’; based on the true story of the Phantom Killer who murdered several people in Texarkana in 1946. Corey Holland (Spencer Treat Clark) and Jami Lerner (Addison Timlin) leave the film to talk and kiss in a secluded area, but the Phantom attacks them. He begins to slash Corey to death. Jami runs but is caught. The Phantom tells her, „This is for Mary. Make them remember.” The next morning, police interview Jami at the hospital. Jami later researches the crimes and attends Corey’s funeral.

Two days before Thanksgiving, Kendra Collins/Thompson goes to the airport to meet her boyfriend, Daniel Torrens, returning from the military. They have sex at a motel and he leaves to get snacks from the vending machine. The Phantom then smashes the window with Daniel’s severed head. Terrified, Kendra jumps out of the bathroom window, breaking her leg. She is killed while trying to start her car. Jami receives a phone call from Corey’s phone. The Phantom tells her, „I’m going to do it again and again until you make them remember.” She decides to tell her police escort, Deputy Foster (Joshua Leonard), about the incident. The next day, residents secure their houses and go to a town meeting.

Jami is helped with her research by ex-classmate Nick Strain (Travis Tope). At the police station, Texas Ranger Lone Wolf Morales (Anthony Anderson) takes over the investigation. Jami receives an e-mail from „Texas Phantom”. She takes this to the police and reveals her theories but they are disproven. Nick asks Jami out to the vigil being held for the Phantom victims. While there, the Phantom shows up and is shot down by a Marine officer. The news is told to the town mayor and they celebrate. Band members Johnny and Roy leave and are warned by Deputy Tillman (Gary Cole) to go home. They decide, instead, to park at a lonely junkyard. While there, they see the Phantom. Johnny is beaten and Roy gets tied up. The Phantom recreates the trombone weapon from the original film. Johnny is shot to death before Roy is stabbed. The next day, Foster tells Lerner that the man that was shot down was a suicidal teen.

Morales and Tillman visit Reverend Cartwright (Edward Herrmann) at his church. They discovered that he sent Lerner the e-mail, but they do not believe he is the Phantom. Jami learns that Charles B. Pierce’s son is still alive and lives in Texarkana. Tillman goes to a bar on Christmas Eve and meets up with a woman. At home, he is shot through the eye and the woman is killed by the Phantom.

Jami and Nick visit Charles Pierce Jr. (Denis O’Hare) where they learn about Hank McCreedy, a sixth victim of the original Phantom whose story was forgotten. He gives his opinion that the new Phantom is Hank McCreedy’s grandson, because the family is angered that McCreedy’s death was not remembered. Jami is told that Hank McCreedy’s wife was named Mary. Lillian finds out that Jami was accepted to college in California and decides to move to California so Jami can go to school. Jami tells Nick she is leaving in the morning and they have sex. Nick is later attacked by the Phantom. While leaving town, Jami pulls into a gas station. She hears gunshots and finds her grandmother dying by the vehicle. The Phantom is seen shooting from a window in a nearby building. Jami runs into the old Union train station and finds Nick’s body. She is shot down by arrows while trying to escape. While immobile, she is confronted by two Phantom Killers. One is Deputy Foster and the other is Corey, who is revealed to have faked his death. Foster reveals that he is McCreedy’s grandson. Corey is shot by Foster. While Foster is attacking Jami, she finds the gun and shoots Foster. It is stated that the body of Foster is never found. Jami moves on with her life and goes to college. In the end, the Phantom’s shadow is seen stalking Jami. 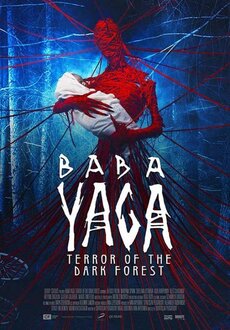