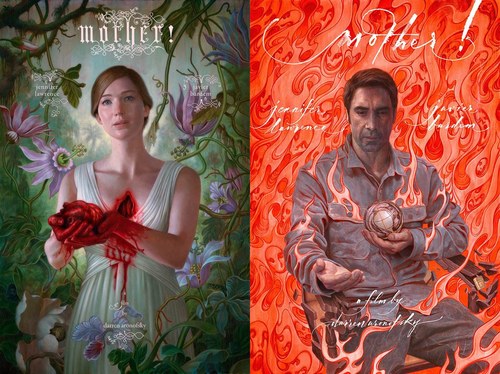 PLOT: A couple’s relationship is tested when uninvited guests arrive at their home, disrupting their tranquil existence.

In a house that has recently been burned by fire, Him, an acclaimed poet struggling with severe writer’s block, places a crystal object in a pedestal. The house morphs to suddenly look newly renovated. In a bed, Mother wakes up, wondering aloud where Him is. She starts seeing things around the house that unsettle her, including visualizing a beating heart within the walls.

One day, Man turns up at the house, asking for a room. Him readily agrees, and Mother reluctantly follows suit. During his stay, Man experiences prolonged coughing fits and Mother catches a glimpse of a fresh wound by his rib area before her husband covers it with his hand. The next day, Man’s wife, Woman, also arrives to stay. Mother is increasingly frustrated with her guests, while Him begs her to let them stay, telling Mother that the guests are fans of his work and that the male guest is dying, and wanted to meet Him. However, when Man and Woman accidentally break and shatter the crystallized object, Mother decides to kick them out.

The couple’s two sons arrive and start to fight over the will their father has left. The Oldest Son, who will be left with nothing, mortally injures his Younger Brother, and seemingly flees, while Him, Man, and Woman take the injured son to get help. Upon returning, Him informs Mother that the son has died. Dozens of people begin arriving at the house for a wake for the dead son. More people arrive, and behave in a way that bothers Mother; she becomes angrier and eventually snaps when they flood the house. She kicks everyone out. Angry with Him for allowing so many people into the house for his own pleasure and ignoring her, she berates him before the two have sex.

The next morning, Mother announces that she is pregnant. The news leaves Him elated and inspires him to finish his work. A few months later, Mother prepares for the arrival of their child and reads Him’s newest piece, which is so beautiful it drives her to tears. Upon publication, it immediately sells out every copy. In celebration, Mother prepares dinner for him when a group of fans arrives at the house. As she barricades herself in her home, more fans arrive and begin to enter the house to use the bathroom. Their behavior devolves into stealing their belongings as keepsakes, and disrupting the environment. An increasingly disoriented Mother makes her way around the house as each room devolves into chaos. Him’s publisher, the Herald, takes part in the madness. Military men with guns arrive to help Mother, but a cult of devoted fans forms around Him; they start to engage in rituals.

Mother goes into labor and finds her husband, who takes her to his study, where she gives birth. The havoc outside subsides as he tells Mother that the massive crowd wants to see the baby. Refusing, she holds on tight to her son. When she falls asleep, however, he takes the baby outside to the crowd, who grab him and break his neck. Devastated, Mother makes her way to the front of the crowd where she sees the hacked corpse of her baby and witnesses the crowd eating his flesh. Furious at them, she calls them murderers and begins stabbing them with a shard of broken glass. They turn on her, beginning to strip and beat her until Him intervenes and stops it. Mother escapes the grasp of the crowd and makes her way to the cellar and the oil tank for the furnace. Despite her husband’s pleas, Mother sets the oil on fire, destroying the crowd, the house, and the surrounding garden and trees.

Both Mother and Him survive, but Mother is horrifically burned while Him is unscathed. He asks her for the love she has left for him, and she agrees to give it to him. He then tears open her chest, removing her heart in the process. As he opens up the heart with his hands, a new crystal object is revealed. He places the object in its pedestal. Once again, the house changes from a burnt-out husk to a newly renovated house. A new Mother forms in a bed and wakes up, wondering aloud where Him is.