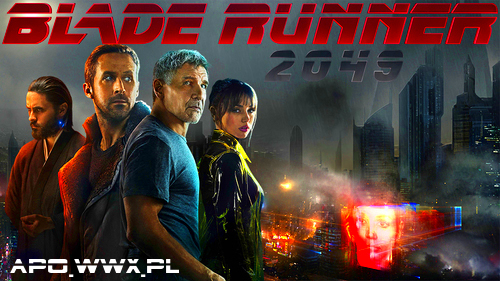 PLOT: A young blade runner’s discovery of a long-buried secret leads him to track down former blade runner Rick Deckard, who’s been missing for thirty years.

In 2049, bioengineered humans called replicants have been integrated into society as bioengineered life has been necessary to ensure humanity’s continued survival. K, a newer model created to obey, works as a „blade runner” for the LAPD, hunting down and „retiring” rogue older model replicants. His home-life is spent with his holographic girlfriend Joi, a product of Wallace Corporation.

K’s investigation into a replicant freedom movement leads him to a farm, where he retires rogue replicant Sapper Morton and finds a buried box with what appears to be human remains inside. Forensic analysis reveals they are of a female replicant who died as the result of complications from an emergency caesarian section. K finds this unsettling as pregnancy in replicants was originally thought to be impossible.

K is ordered to destroy all evidence related to the case and to retire the child by his superior, Lieutenant Joshi, who believes the knowledge that replicants are able to reproduce to be dangerous and could lead to war. K, disturbed by his orders, visits the headquarters of replicant manufacturer Niander Wallace who identifies the body as Rachael, an experimental replicant. In the process, he learns of her romantic ties with former veteran blade runner Rick Deckard. Believing that reproduction in replicants can bolster his production, but unable to give them this ability himself, Wallace sends his replicant enforcer Luv to steal Rachael’s remains from LAPD headquarters and follow K to find Rachael’s child. Wallace hopes to use the child to engineer replicant reproduction and expand his off-world operations.

Returning to Morton’s farm, K finds a hidden date that matches a childhood memory about hiding a toy horse. K later finds the toy horse at an orphanage, suggesting that his memories—which he thought were implants—are real. Joi insists this is evidence that K is in fact a real person, giving him the nickname „Joe.” While searching birth records for that year, he discovers an anomaly: „twins” were born on that day with identical DNA except for the sex chromosome; only the boy is listed as alive. K seeks out Dr. Ana Stelline, a memory designer who informs him that it is illegal to program replicants with humans’ real memories, leading K to believe he might be Rachael’s son. After failing a test of his replicant behavior, K is suspended by Joshi, but he explains that he failed the test because he completed his mission in killing the child. Joshi, knowing K will be chased for deviating from his base line, gives him 48 hours to disappear. K transfers Joi to a mobile emitter despite knowing if it is damaged she will be erased.

Undeterred, K has the toy horse analyzed and finds traces of radiation that lead him to the ruins of Las Vegas, where he finds Deckard. Deckard reveals that he scrambled the birth records to cover his tracks and was forced to leave a pregnant Rachael with the replicant freedom movement to protect her. Luv and her men arrive to kidnap Deckard, having murdered Joshi and tracked K’s location. They leave a badly injured K for dead, in the process destroying Joi’s emitter. He is later rescued by the replicant freedom movement who were tracking him and told by their leader, Freysa, that Rachael’s child is actually a girl. K deduces that Stelline is Deckard’s daughter, as she is the only one capable of creating the memory and implanting it into him. Freysa urges K to prevent Wallace from uncovering the secrets of replicant reproduction by any means necessary, including killing Deckard.

In Los Angeles, Deckard is brought before Wallace, who suggests Rachael’s feelings for him were engineered by Tyrell to test the possibility of a replicant becoming pregnant. Deckard refuses to cooperate with Wallace, even when promised a replicant recreation of Rachael. Luv escorts Deckard to one of Wallace’s off-world outposts to be tortured for information. K intercepts them before fighting and killing Luv. He stages Deckard’s death to protect him from both Wallace and the replicants, and leads Deckard to Stelline’s office. K encourages Deckard to meet his daughter and laments that all the best memories are hers. Deckard cautiously enters the office and approaches Stelline, while K, severely wounded, lies down on the steps and stares up at the falling snow and dies.