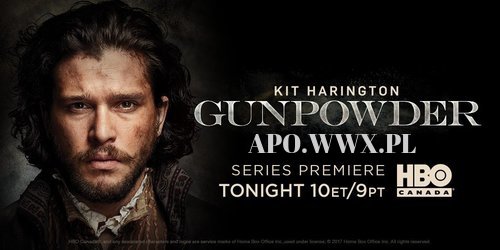 PLOT: British activist Guy Fawkes and a group of provincial English Catholics plan to blow up the House of Lords and kill King James I in the early 17th century.

Season 01, Episode 01
It is 1603, and as England wars with Spain and the bloody persecution of Catholics intensifies, a young nobleman resolves to avenge his kin and defend his faith by any means necessary.

Season 01, Episode 02
As the king’s network of spies close in on them, Catesby and Wintour attempt to raise an army for their plot across mainland Europe. Returning to London with Guy Fawkes in tow, Catesby assembles his gang of plotters for the first time. They know they must act fast, and the plan is formed – they will strike next week, 5 November, at the opening of Parliament.

Season 01, Episode 03
On the eve of the 5th of November, Catesby, Fawkes and the plotters load the tunnels below Parliament with barrels of gunpowder. Across the city, Father Garnet is under pressure to reveal Catesby’s plot for the good of the Catholic faith. Will the priest be the one to betray Catesby at the eleventh hour?