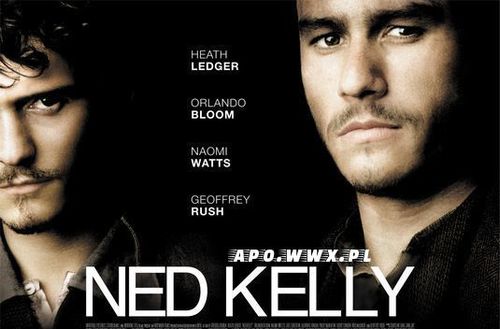 PLOT: An innocent man becomes one of the most wanted criminals the world has ever known.

The film starts out with a young Ned Kelly rescuing a young boy from drowning. It then pans to the Australian bush with Ned talking about his father. He then awakens in the Australian outback and sees a white mare. He rides it into town, only to be arrested and subsequently imprisoned in 1871, for supposedly stealing the horse, even though it had actually been stolen by Wild Wright, Ned’s friend.

Two years later he is released and comes home to a warm welcome from his Catholic Irish family. The Kelly family are seemingly working to get ahead in life, by owning horses and farming. One night at a bar, a local Victoria Police Officer named Fitzpatrick, offers to buy Ned’s sister a drink. After several attempts, Kate insists she doesn’t want one. Ned intervenes and hostilities ensue when fellow officers help Fitzpatrick. Getting back at Ned, the Victoria Police Officers confiscate the Kellys' horses. Ned, his brother Dan and their friends Steve Hart, Joe Byrne, Aaron Sherrit and Wild Wright steal back their horses. One evening later, Fitzpatrick arrives at the Kelly house, while Ned is away, to visit Kate, only to be told that she doesn’t want to see him. Fitzpatrick tells them they have warrants for them, for horse stealing. A fight ensues and Fitzpatrick returns to the police office, telling the others that Ned Kelly shot him.

The police then arrest Ned’s mother (in Ned’s absence). Ned, Dan, Steve and Joe become outlaws on the run. They later meet some Police in the Victorian bushlands and kill Constable Lonigan and two other Officers in a shootout. For the following months the „Kelly Gang” avoids capture, living in the outback, often without food. The Colonial Government sends in Superintendent Francis Hare, who arrests many people including Aaron. Aaron, being told that they don’t want to harm his friend Joe, but only want the Kellys, provides a location where the gang might be. Joe learns of this and arrives one night armed with a loaded shotgun and kills Aaron for being an informant.

The next day the Kelly Gang take over the town of Glenrowan, taking seventy hostages at the Glenrowan Inn, but also winning the trust of the townspeople there. Hare and the Police are set to capture the gang as their train is saved from derailment by an escaped hostage. The police then lay siege to the inn at dawn. The Kelly Gang, using plate metal body armour, emerge from the inn and begin shooting, but are forced inside again. Joe is subsequently shot and dies inside the inn. Morning passes, and the police wonder where the outlaws are. Ned then re-emerges from the inn but is shot in the arms and legs and falls. Dan and Steve, down to their last bullets and knowing all is lost, commit suicide. Ned regains consciousness and even though gravely injured, continues to fire at the police. He finally is shot to the ground and taken down. Ned is loaded onto a train, and Hare asks if he may have the beloved green sash. The train then steams away.

It is noted that even with a petition of over 30,000 signatures for mercy, Kelly was sentenced to death for the murder of Constable Lonigan and hanged at Old Melbourne Gaol on 11 November 1880.