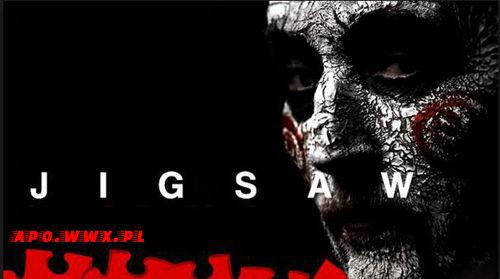 PLOT: Bodies are turning up around the city, each having met a uniquely gruesome demise. As the investigation proceeds, evidence points to one suspect: John Kramer, the man known as Jigsaw, who has been dead for ten years.

A criminal named Edgar Munsen manages to evade police and is pursued onto a rooftop, where he activates a triggering mechanism. He is shot and severely injured by police detective Halloran and his fellow officers.

Elsewhere, five people are held captive inside of a room in a run-down barn, each with a metal noose around their neck leading them to a wall of buzzsaws. A taped recording from John Kramer explains that to escape, they must give a sacrifice of blood and will eventually need to confess their past sins. The chain nooses begin to pull them towards the saw blades. Four manage to survive by offering blood via purposely cutting themselves on the saws, though one man who was still unconscious during the message and only woke up moments before the ending of the game appears to die. The next test reveals that one of the group-members, Carly, inadvertently caused the death of an asthmatic woman by stealing her purse, which had her emergency inhaler inside. A trio of syringes are revealed; one contains an antidote for a poison in her system, another a saline solution, and the third a potent acid. She must inject one into herself in order to save the rest from being hanged. Eventually, volatile group-member Ryan stabs all three into her to save himself, partially melting Carly’s face and killing her.

During the games, Halloran and his partner, Detective Hunt, begin to investigate the matter, especially with the discovery of bodies that appear to belong to the unnamed man and Carly, who were both killed in the barn. Halloran becomes suspicious of forensic pathologists Logan and Eleanor. Though in turn Logan, a military veteran and former doctor whose wife was killed two years prior, is suspicious of Halloran’s motives. Munsen is kidnapped from the hospital by an unseen assailant. When the police captain orders John Kramer’s grave be exhumed, Munsen’s body is found inside.

In another room, Ryan tries to cheat by escaping through a door marked „No Exit”, and his leg is trapped by razor-sharp wires, immobilizing him. Fellow group members Anna and Mitch discover an unlocked door leading into a grain silo, but are quickly trapped inside. A taped message explains that Anna and Mitch will be buried in grain and then killed by falling debris unless Ryan pulls a lever that will free him from the wires around his leg. Ryan eventually agrees, but upon pulling the lever, his leg is instantly severed, though Anna and Mitch survive. Mitch is tested next. A taped message reveals that he sold a motorcycle with a faulty brake to a young man revealed to be John Kramer’s innocent nephew, which resulted in his death in an automobile accident. Mitch will be lowered into a spiral-shaped blade, unless he can reach for a brake lever. However, he is unable to complete the task and is subsequently killed, with his body being shredded.

Logan and Eleanor speak in a bar about their distrust of Halloran, before Eleanor takes Logan to her „studio”, revealing that she is an obsessive fangirl of the „Jigsaw Killer” case, and has built replicas of many of his previous traps, which she worries could incriminate her. Detective Hunt has followed them and informs Halloran of the studio. Halloran orders the two be arrested, though Logan is able to convince Hunt, an old friend, that Halloran is actually to blame, given his past dealings with Edgar Munsen. Logan and Eleanor depart for the barn after Eleanor is able to deduce the location of the game. Halloran manages to pursue them.

Anna tries to cheat and slip through a doorway to freedom, only to be captured. She awakens with a gravely wounded Ryan, each chained up in a room with a hooded figure. The hooded figure removes his robe to reveal John Kramer. John reveals that Anna, an old neighbor of his, suffocated her infant child in a fit of rage, and threw the blame on her husband by planting the body next to him while he slept. Her husband later committed suicide in a fit of grief, thinking he accidentally smothered his own baby. John explains that the two have not yet earned their survival, and have gotten his message „backwards.” He places a loaded gun between them, telling them it is the „key” to their survival. Anna misinterprets John’s message and attempts to shoot Ryan, only for the gun, which is revealed to be rigged, to backfire and kill her. Ryan begins to cry upon realizing that keys to their chains were hidden inside of the gun, and destroyed when Anna pulled the trigger.

While Logan and Eleanor investigate the barn, they are ambushed by Halloran. Eleanor escapes, and while pursuing her Halloran is drugged and knocked-out by an unseen assailant. Logan and Halloran both awaken inside of collars rigged with laser cutters. The two are told that they must confess all of their sins or else they will die, and they will have the choice of who will face their test first. Halloran forces Logan to go first. Logan confesses that he made a mistake and mislabeled John Kramer’s X-Rays, which caused his cancer to go un-diagnosed until it was too late. Despite confessing, Logan appears to die. Halloran confesses at the last second, admitting that he has allowed criminals and murderers to walk free for personal gain.

Suddenly, Logan’s body stands up, stating that he faked his death in order to get Halloran to confess, and revealing that the barn game takes place ten years in the past. He was the unnamed man who appeared to die in the first game of the barn trap, but because he was unconscious when the first message was delivered, John Kramer saved him, feeling Logan should not die out of error. John subsequently took Logan on as his apprentice. The bodies that were found were actually the bodies of criminals that Halloran allowed to walk free, and they were placed into the same tests that Logan was meant to face ten years prior. Logan also reveals that Munsen, one of the criminals Halloran let go, was responsible for murdering his wife. However, because Halloran refused to confess all of his sins, and because he selfishly broke the rules and forced Logan to go first, he will die, and be framed as the new Jigsaw killer. Logan tells Halloran that he „speaks for the dead”, and reactivates the laser-collar around his neck. Logan slams the door as Halloran’s head is sliced apart, killing him.