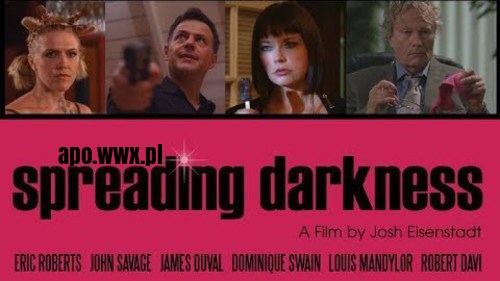 PLOT: A corrupt CEO grows increasingly paranoid he is being stalked by his former victims and a psychiatrist who rewards patients with pink socks.

Darkness is calling…Alarms shriek as the sexy, pistol-packing Harriet Skelp and her eccentric partner Otto Jeter search out a mysterious technology. Businessman, Stu Undercoffler (Eric Roberts) receives some very bad advice that will take him from upstanding entrepreneur to ruthless racketeer. His dealings become shady, his methods unconscionable. Stu finds the riches he seeks but has no idea that–Darkness has started to spread. It’s gone viral, infecting everyone Stu comes in contact with, the darkness has taken root. And once it begins, it’s impossible to stop. Suicides, cars wrecked, madness, killers stalking the streets of Los Angeles. Darkness is all around. And on one fateful night, it will come full-circle, winding it’s way back around to Stu as he’s called to task for his evil deeds. As bullets fly and bodies fall, sex and violence wreak havoc, and the viral infection reaches epidemic levels. Those who let the shadowy doom into their hearts are no longer just victims, they are carriers. They are… Spreading Darkness.