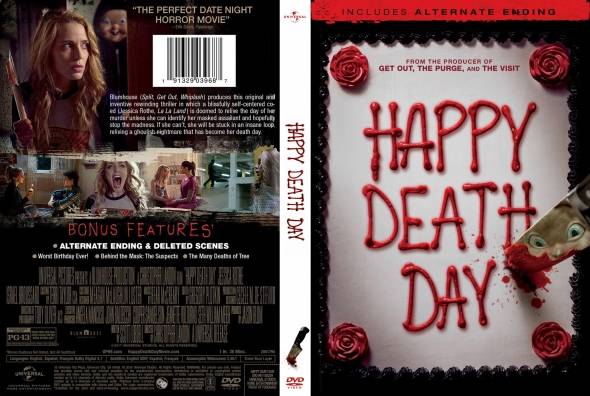 PLOT: A college student must relive the day of her murder over and over again, in a loop that will end only when she discovers her killer’s identity.

Theresa „Tree” Gelbman wakes up on her birthday on Monday, September 18, 2017 in the dorm room of classmate Carter Davis after a drunken binge the previous evening. Tree goes through the day being self-centered, dismissive, and condescending to her classmates and previous hook-ups, ignoring her father’s invite to a restaurant, throwing away a birthday cupcake given to her by her roommate Lori Spengler, and having an affair with Dr. Gregory Butler, her professor. That night, while going to a party, Tree is lured into a tunnel where she is brutally murdered by a hooded figure wearing a mask of the campus mascot.

Tree wakes up the next morning back in Carter’s bed with the previous day’s events repeating. Unnerved, she relives the day and avoids the tunnel, instead heading to a fraternity house for a surprise party. However, while hooking up with her classmate Nick, the masked killer murders him before killing Tree once more. Tree realizes that she is in a time loop and tries to avoid her death by barricading herself in her room. However, she is murdered again when the killer hides in her bathroom.

During the next loop, she relays her story to Carter, who suggests that she take advantage of the loop in order to figure out who her killer is. She spends the next loops, trailing several suspected classmates, all of which end in her death as she is stalking the current suspect.

In the next loop, after being bludgeoned by a baseball bat from her previous death, Tree passes out shortly after waking up. She awakens in the campus hospital where she learns she has retained damage from her previous murders. Tree escapes the hospital room only to be chased by the killer until she manages to flee in Butler’s car. While driving, she is pulled over by a police officer and volunteers to be arrested in order to be spared. While held in the officer’s squad car, the killer runs over the officer and blows up the squad car after lighting it on fire, sending her through another loop.

Waking up in Carter’s bed again, Tree convinces Carter of her predicament by showing that she holds foreknowledge of the day’s events. Tree admits to Carter that she does not like who she’s become as she is distant from her father ever since her mother passed away three years ago. Tree catches a local news report on Joseph Tombs, a serial killer who is being held in the hospital on her campus. Concluding that Tombs is her killer, Tree rushes to the hospital to warn of his escape. Tombs breaks free and nearly kills Tree, but Carter follows and rescues her. Unfortunately, Tombs snaps Carter’s neck before chasing Tree to a nearby bell tower where she manages to subdue him with a crowbar. Realizing that Carter will remain dead if she doesn’t restart the loop, Tree hangs herself in the tower.

During the next loop, Tree goes around righting the various wrongs she has caused, ending her affair with Dr. Butler, finally meeting with her dad to resolve her inner grief, and resolving to be a kinder person. That night, she prepares to stop Tombs. He manages to get the upper hand on her until Tree utilizes a campus-wide blackout that occurs during her loops to disarm him and shoot him to death. Relieved to finally be free, she celebrates her birthday in Carter’s room and eats the cupcake given to her by Lori.

However, the next morning Tree wakes up again on her birthday. Confused and distraught over the fact that killing Tombs did not stop the time loops, Tree returns to her room in order to run away, where Lori offers the cupcake again. Tree realizes that she had died in her sleep and also notes that this was the only time she had ever eaten the cupcake. Tree realizes that Lori is the true killer; Lori had poisoned the cupcake, but when Tree didn’t eat it, she utilized her job as a nurse in the hospital to frame Tombs for Tree’s murder. Lori attacks Tree and confesses that she was angry that Dr. Butler had shown interest in Tree over her before the two fight. Tree manages to stuff the cupcake into Lori’s mouth before kicking her out of a window, sending her falling to her death.

Tree and Carter muse over the day’s events back in the restaurant, and he offers her his room for the night, also commenting her situation is a lot like the film Groundhog Day. Tree wakes up the next day believing to be in another loop, but it turns out to be a prank by Carter, and the two share a kiss.