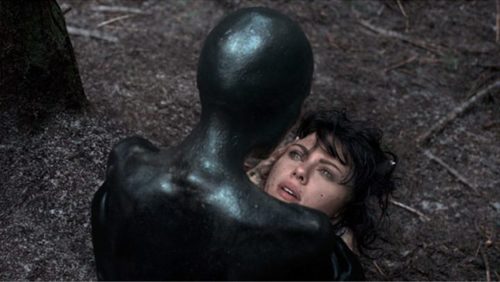 PLOT: In Glasgow, Scotland, a motorcyclist retrieves a young woman’s body from the side of a road and places her in the back of a van. A naked woman (Johansson) strips her and dons her clothes. She goes to a mall and buys clothes and make-up.

The woman drives the van around Scotland, picking up men on the street. In her apartment, the men follow her into a black void and are submerged in an abyss of liquid. Beneath the surface, their bodies vanish, leaving empty skins behind.

At a beach, the woman attempts to pick up a swimmer. He tries to save a drowning couple, but almost drowns himself. The woman strikes the swimmer’s head with a rock, drags him to the van, and drives away. The motorcyclist retrieves the swimmer’s belongings and ignores the couple’s distraught toddler.

The woman seduces a lonely, sexually inexperienced man with a facial disfigurement, but lets him escape and flees to the Scottish Highlands. The motorcyclist intercepts the man and bundles him into a car, then sets out in pursuit of the woman with three other motorcyclists.

The woman abandons the van in the fog. She walks to a restaurant and attempts to eat cake, but retches and spits it out. At a bus stop, she meets a man who brings her to his home; they eat, watch television and listen to music. Alone in her room, she examines her body in a mirror. She visits a ruined castle with her companion and they kiss. At his house, they begin to have sex, but she stops and examines her vagina, alarmed.

Confused, the woman wanders in a forest and takes shelter in a bothy. She is woken by a commercial logger molesting her. After she runs into the forest, he catches her and attempts to rape her. In the struggle, he tears skin from her back, revealing a black, featureless body. As the woman extricates herself from her artificial skin, the logger douses her in fuel and burns her alive.