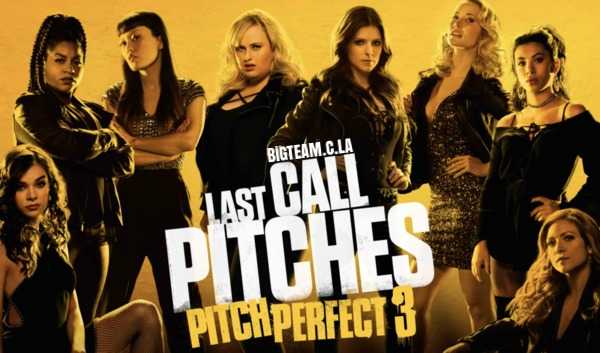 PLOT> Following their win at the world championship, the now separated Bellas reunite for one last singing competition at an overseas USO tour, but face a group who uses both instruments and voices.

Two years after the events of the second movie, the Bellas have graduated college, but have jobs which they all hate. Desperate to see each other again to sing once more, Beca (Anna Kendrick), Fat Amy (Rebel Wilson), Chloe (Brittany Snow), Aubrey (Anna Camp), Lilly (Hana Mae Lee), Stacie (Alexis Knapp), Cynthia-Rose (Ester Dean), Florencia (Chrissie Fit), Jessica (Kelley Jakle), and Ashley (Shelley Regner) are all thrilled to learn that Emily (Hailee Steinfeld), now a senior at Barden and leader of the Barden Bellas, has seemingly asked for the Bellas to reunite at an event in New York Aquarium to sing with each other once more. Upon arriving at the reunion they are told that the reunion was not for the Bellas to sing together, but to watch Emily sing with the new Bellas.

They later gather at a bar in disappointment and Emily apologizes as she thought it would be the only way for them to see each other again. They all express how much they miss each other. Suddenly, Aubrey convinces them to join a USO performance accessed by her Army officer father. If they win the competition, they get to open for DJ Khaled. The Bellas gladly accept, all except for Stacie who is eight months pregnant at the moment and is unable to go with them. The Bellas later arrive at a hangar where two soldiers, Chicago (Matt Lanter) and Zeke (Troy Ian Hall) introduce them to their competition, revealed to be three other groups who use instruments, unlike the Bellas. When the band Evermoist, led by their leader Calamity (Ruby Rose) begin to mock and belittle the Bellas, the competitors are challenged to a riff-off by the Bellas, who leave defeated when the other groups compete using their musical instruments.

The Bellas are taken to a fancy hotel in Spain, where Chloe begins to catch an eye for Chicago. Fat Amy finds an old stuffed bunny sitting in her bed, which she recognizes as an old toy she used to hold when she was very little as her father Fergus (John Lithgow) sang her to sleep every night. Amy then realizes that her father is staying in the same hotel she is in and is shocked upon the discovery, seeing as how Fergus is an international criminal. Later that night, the Bellas are invited to a party at DJ Khaled’s suite at the hotel, where Fat Amy splits with the group when she is called to be at a poker tournament. The tournament was set up by Fergus, who promptly begs for Amy to be back in his life. A hesitant Amy finally agrees to do so after seeing how much he has changed. Beca, after having her breasts grabbed by Chloe, who develops a friendship with DJ Khaled’s music producer Theo (Guy Burnet), is taken to DJ Khaled’s music editing room. Beca produces a mix which impresses Theo who is prompted to send the mix to DJ Khaled. Moments later, the party is thrown into chaos when Aubrey accidentally sets the suite on fire.

The Bellas are left in disgrace after the incident with no hopes of winning the competition until Stacie calls the girls to inform she has given birth to a baby girl and named her Bella. This motivates the Bellas to just perform their hearts out without trying to win. Back at the USO competition, the Bellas perform tremendously to adoring crowds through different performances, repairing their reputation and chances to win in the process. Fergus is accepted by Amy, who believes he came to one of their performances to see her. He accidentally reveals that he has not seen her perform at all, while confessing that he is only trying to acquire an offshore account Amy’s mother set up which contains US$180 million. After Amy shuts out Fergus again, Chicago and Zeke escort her away from her father, who swears revenge on her. Meanwhile, only Beca is asked personally by DJ Khaled to open for him, disregarding the other Bellas. Beca politely declines the offer and leaves to her room. Later, the Bellas are taken away by a Frenchman in a dark grey van out onto a yacht in a nearby harbor. The yacht belongs to Fergus, who is using the Bellas as a means to get Amy to come for him. Amy and Beca hear of the kidnapping and decide to rescue the Bellas. Beca distracts Fergus by having the Bellas perform „Toxic” for him and two of his men, just as Amy sets the yacht to explode. The Bellas escape the yacht just before it blows. Fergus survives the explosion and is arrested for his crimes.

After the Bellas are rescued by the military, Fat Amy reveals DJ Khaled’s proposition to Beca to the others. They encourage her to take the chance, and they all agree that now it’s time to move on with their lives, with Amy using her bank account for multiple tributes to singers named Amy, Aubrey trying to be a birthing coach, Flo’s juice cart becoming part of an international brand, Chloe getting accepted into vet school, Cynthia-Rose staying at the base to get into flight school, Emily going back to Barden to prepare for her upcoming abnormal psychology test while continuing her songwriting, and Lilly revealing that the reason she was quiet was because she was possessed by Satan and the yacht incident snapped her out of it, and that her real name is Ester. They know very well they’ll be separated, but still be connected to each other as a family. Later at the USO’s final performance, Beca opens for DJ Khaled and sings on stage, and afterwards brings up the Bellas onstage for the girls to sing their final performance with the other competitors gladly watching the Bellas sing „Freedom! ’90” to their hearts content.

Gail (Elizabeth Banks) and John (John Michael Higgins) (who were the Bellas' public announcers in the previous installments) finish filming the Bellas as part of a documentary they have been making about the girls throughout the whole film, only to be appalled when John realizes they didn’t record the Bellas' final performance, which was supposed to be the documentary’s big ending. A series of mid credit scenes reveal the Bellas' separate story arcs closed out to their mostly happy endings, with Lilly hanging around with DJ Dragon Nutz, whom she flirted with earlier, Chloe and Chicago making out whilst Beca, watching uncomfortably, speaks with Theo about her new job now that he works for her, and Aubrey reconnects with her father.