The Inevitable Defeat Of Mister And Pete 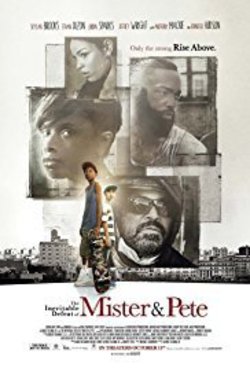 The Inevitable Defeat Of Mister And Pete (2013)

Plot: Two youths from the Brooklyn projects attempt to fend for themselves on the streets after their parents are arrested in this urban drama from director George Tillman Jr. (Notorious, Faster). It’s summer in New York City, and 14-year-old Mister (Skylan Brooks) is hungry. His irresponsible mother unable to hold down a job, Mister’s situation goes from bad to worse when she is taken into custody, and Child Protective Services attempts to track him down. Meanwhile, Mister’s nine-year-old friend Pete (Ethan Dizon) finds himself in the same sinking boat. Together, Mister and Pete search for sustenance while attempting to avoid the violence that plagues their neighborhood. All the while Mister grows to feel invincible, never realizing that it’s his vulnerability — not his youthful bravado — that’s truly his saving grace. Jennifer Hudson, Jeffrey Wright, Anthony Mackie, and Adewale Akinnuoye-Agbaje co-star. Directed by: George Tillman Jr.