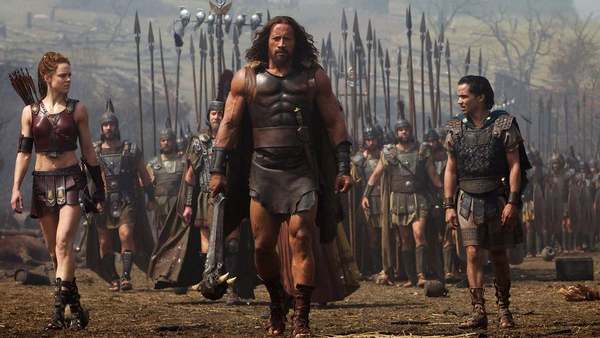 PLOT:  Hercules (Dwayne Johnson) is the leader of a band of mercenaries comprising the spear-wielding prophet Amphiaraus (Ian McShane), the knife-throwing thief Autolycus (Rufus Sewell), the feral warrior Tydeus (Aksel Hennie), the Amazon archer Atalanta (Ingrid Bolsø Berdal) and his nephew storyteller Iolaus (Reece Ritchie). Hercules is said to be the demigod son of Zeus, who completed the legendary Twelve Labors, only to be betrayed by Hera, who drove him insane and caused him to murder his wife Megara (Irina Shayk) and their children during a visit to King Eurystheus (Joseph Fiennes). Hercules has since rejected Zeus and chosen to live as mortal, and is tormented by visions of Cerberus.

One day, Hercules and his men are approached by Ergenia (Rebecca Ferguson), on behalf of her father, Lord Cotys (John Hurt), who wants Hercules to train the armies of Thrace to defend the kingdom from bloodthirsty warlord Rheseus (Tobias Santelmann). Hercules accepts after he and his men are offered his weight in gold, and the band is welcomed to Thrace by King Cotys and General Sitacles (Peter Mullan), leader of the Thracian army. After training the army, Hercules and his men lead them into battle against local barbarians as a test of their strength. After the barbarians are defeated, Hercules and Sitacles confront Rheseus and his soldiers, believed to be Centaurs, but soon proven to be men on horseback. Rheseus is defeated and taken back to Thrace as a prisoner, where he is tortured and humiliated. Noticing that Ergenia has taken pity to him, Hercules confronts her and finds out Rheseus was merely retaliating against Lord Cotys' aggressive attempts to expand his kingdom, and, although Ergenia doesn’t agree with his methods, she abides to them for the sake of her son, Arius, Lord Cotys' successor to the throne.

After receiving their reward, the mercenaries are ready to leave, but Hercules decides to stay behind to stop Cotys, and all but Autolycus choose to follow him. However, they are overpowered and captured by Sitacles and his men. While chained, Hercules is confronted by King Eurystheus, who is in league with Lord Cotys, and reveals that he drugged Hercules the night his family died, viewing him as a threat to his power. Hercules' family was in fact killed by three vicious wolves sent by Eurystheus, resulting in Hercules' constant hallucinations of Cerberus. When Lord Cotys orders Ergenia to be executed for her betrayal, Hercules is encouraged by Amphiaraus to embrace his destiny and breaks free of his chains, saving Ergenia and slaying the wolves with his bare hands. Hercules releases the prisoners, including Rheseus, and then confronts King Eurystheus, impaling him with his own dagger. He is attacked by Sitacles, who is then stabbed by Iolaus.

Outside, Hercules and his forces battle Lord Cotys and his army. Arius is taken hostage, but then rescued by Autolycus, who has decided to return to help his friends. In the ensuing battle, Tydeus is mortally wounded while protecting Arius, but fights on slaughtering numerous Thracian soldiers. Hercules then pushes a statue of Hera from its foundations and uses it to crush Lord Cotys and many of his soldiers. The surviving soldiers bow to Hercules, and Arius takes the throne, with Ergenia at his side, while Hercules and his men depart in search of other adventures.