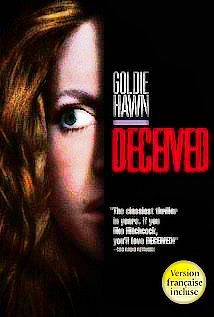 PLOT: Adrienne Saunders (Hawn) is happily married to her art dealer husband, Jack (Heard). They have a daughter named Mary (Peldon). Adrienne hears from a friend that she thought she saw Jack in town when he claimed to be on an out of town business trip. Adrienne confronts him, but he denies being in town, and their lives continue. Soon after a museum curator is mysteriously murdered, and a relic that Jack bought for the museum is revealed to be a fake. Jack is placed under suspicion, and then Adrienne receives word from the police that Jack perished in a car accident. In trying to wrap up Jack’s affairs, Adrienne begins to suspect that her husband had switched identities with a high school classmate, Frank Sullivan. When she sees a high school yearbook picture of her husband attributed to Sullivan, she is convinced.

She tracks down a relative of Saunders, who confirms that Frank and Jack were inseparable in high school. After Jack died, the relative never saw Frank again. She explained that Frank’s father was an alcoholic and that his mother worked as a toll booth operator. She directs Adrienne to Frank’s mother, who lives in a rundown apartment in Brooklyn. Frank’s mother bitterly receives the news that she has a granddaughter, telling Adrienne that Frank was always selfish and that he never looked in on her.

A stalker lurks at Adrienne’s loft. He comes in to Adrienne’s bed while she is asleep and caresses her. He watches Mary, who is spooked by the man in her room at night. One day, as the housekeeper is finishing up her chores and leaving, she surprises the stalker who attacks her, leaving her almost dead in the bathroom and ransacking the apartment.

At work, Adrienne gets an urgent message from Mrs. Sullivan, and she rushes out to her apartment. When she gets there, the door is open, and Mrs. Sullivan is nowhere to be found. As Adrienne looks for her in the apartment, Jack appears. Adrienne slaps him and rages at his cruelty. Jack calms her down and tries to explain. He says that when Jack died, he was completely distraught and that he just sort of fell into his identity during the mourning process. He reveals that a man named Dan Sherman had discovered Jack’s false identity and blackmailed him. Jack faked his death in order to escape, knowing that he would have to give up his life with Adrienne and Mary. He tells her that Sherman is insistent on having an Egyptian necklace which is in their apartment, and he asks Adrienne to look for it. As she leaves the apartment, Jack watches her from the window. Behind him, the body of his dead mother lies on the bed with a plastic bag over her head.

During her search for the necklace, Adrienne discovers a Parks Department photo ID. It bears her husband’s picture and the name Dan Sherman. She tracks down an address and pays a surprise visit to the house. A pregnant Mrs. Sherman is on the phone and lets her in, thinking she is with the moving company. Adrienne looks around the house and sees wedding pictures of her husband with Mrs. Sherman. In a photo album, she sees a picture of Mary and confronts Mrs. Sherman about it. Mrs. Sherman says that it is a picture of her husband’s dead sister, demanding to know who Adrienne is. The person on the phone is Jack/Dan, who asks her to give the phone to Adrienne.

He congratulates Adrienne on tracking down his new life, and he reveals that he has kidnapped Mary with no intent to harm her. Mary explained that she had traded the necklace with another girl, and Jack instructs Adrienne to retrieve it and meet him at 9:00 p.m. at their loft to exchange Mary for the necklace. At the loft, Adrienne asks to see Mary, and Jack explains that she is downstairs playing in the car. When Adrienne tries to go see her, Jack pins her against a wall and demands the necklace first. Adrienne stabs him and tries to flee. After a long chase throughout the construction in the rest of the building, Adrienne lures Jack into an elevator shaft, where he falls to his death.