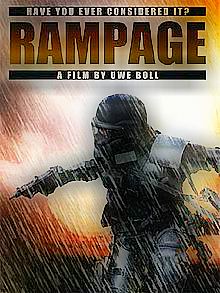 PLOT: In the fictional town of Tenderville, Oregon, Bill Williamson, a 23-year-old man, is living with his parents and working a low-paid job as a mechanic, feeling bombarded with the problems of the world, by ubiquitous TV sets, radios, and the outspoken political views of 21-year-old Evan Drince, who seems to be his sole friend. Bill’s parents ask him to move out and Bill leaves for work, stopping to get coffee along the way, and argues with the shop owner when he is unsatisfied with his coffee. At work, his boss interrupts him while Bill is working on a personal vehicle off the clock. The boss then condescendingly dismisses Bill’s request for a raise.

Back at home, Bill prints out fake money and then constructs a suit of Kevlar body armor, complete with a ballistic helmet and a paintball mask. Armed with two submachine guns, two semi-automatic pistols, and two knives, he heads into the center of town. First, he incapacitates the police by car-bombing their headquarters with a remote-controlled, bomb-loaded van. He then walks through the streets, shooting people at random with the submachine guns, and stops to taunt and later kill the coffee shop owner. Two police officers open fire on him, but Bill’s armor blocks the bullets and he kills both officers. He goes into a salon filled with several hiding women and takes off his mask in order to get a drink before leaving without shooting anyone, but then returns after realizing he revealed his identity to the salon occupants, all of whom he kills.

Bill goes unnoticed into a bingo parlor, orders a sandwich, harasses the host, and leaves without shooting anyone, believing the elderly patrons are already close enough to dying. He then enters a local bank, killing the security guard before shooting some of the employees and customers who attempt to subdue him. He proceeds to rob the bank, forcing the manager to empty a safe full of money into a plastic trash bag. Outside the bank, he secretly switches the money he stole with his fake money and burns the bag in a trash can, shouting that money is worthless and causes the problems of the world.

After killing a restaurant waitress while fleeing, Bill calls Evan, who is in a forest nearby expecting him for a mano-a-mano paintball competition. Bill drives to the forest and is pursued by several police officers, led by Sheriff Melvoy. Bill kills most of the officers with explosives and flees into the forest, pursued by Melvoy, the only surviving policeman. When he arrives at the forest, Bill ambushes Melvoy, stabbing him and leaving him to die. Finding Evan, Bill immobilizes him with a stun gun and then places the Beretta pistol in Evan’s hand, shooting him in the head to give the illusion of suicide. Bill puts the armor suit and weapons on Evan’s corpse, leaves the forest, and burns remaining evidence in a barrel.

Bill then returns home before his parents arrive with horror stories about the killings in town. While they are conversing in front of the television, news stations report that they have identified the killer as Evan, and that at least 93 people have been killed in the rampage. In his room, while packing his belongings and the stolen bank money, Bill hears a local television news report that police have arrested Evan’s father, an activist during the Vietnam War era, who is accusing Bill of the crime and claiming the innocence of his son. The story concludes with a home video of Bill announcing his departure on a personal quest to unknown whereabouts, to further reduce the world’s population. A text indicates Bill had disappeared from that point on, and two years later, his video recording found its way onto the Internet.