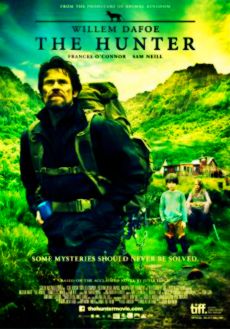 PLOT:  Mercenary Martin David (Willem Dafoe) is hired by the military biotech company Red Leaf to go to Tasmania and gather samples of the Tasmanian tiger, with further instructions to kill all remaining tigers to ensure that no one else ever will get their DNA.

Posing as a university biologist, Martin lodges in the home of the Armstrong family: Lucy (Frances O’Connor) and her two young children Katie (Morgana Davies) and Jamie (Finn Woodlock). Lucy is perpetually benumbed from prescribed medication, taken after the disappearance of her environmentalist husband, Jarrah Armstrong. Speculation surrounds Jarrah’s disappearance, particularly with regards to a longstanding conflict between the local loggers and the 'greenies', a group of environmentalists who have set up road blocks to the forest to prevent its deforestation. Martin goes into the bush for twelve days at a time, setting up various steel traps and makeshift snares, while waiting patiently to see if the tiger will surface. During his short stays at the Armstrong’s to resupply, Martin slowly befriends the children, and discovers that Lucy’s medication is delivered to her by Jack Mindy (Sam Neill), who has been unofficially looking in on the family. Martin confiscates Lucy’s medication, and bathes her while she is unconscious.

During one return from the bush, Martin finds Lucy has recovered from the symptoms of her addiction. Jamie provides Martin with a clue as to the tiger’s whereabouts: a drawing of the tiger near trees and small bodies of water. From the drawing, Martin is able to deduce the tiger’s location on his map. On his next trip out, Martin stumbles across Jarrah’s skeletal remains and discovers that he had been shot through the head. Martin gives him a proper burial, but does not reveal his findings to the Armstrong family. On his return to the Armstrong house, Lucy informs him that Red Leaf had initially contracted Jarrah to locate the tiger, a pursuit he eventually abandoned in favor of taking up an environmental cause to protect wildlife and that Red Leaf wanted Jarrah to find the tiger because they believed that it had a paralyzing venom in its bite.

While hiking to check his traps, Martin is ambushed by a rival Red Leaf operative sent to replace him. The man binds Martin’s hands and instructs Martin to lead him to the tiger’s cave, but Martin instead leads the operative past one of his steel traps. The operative steps on the trap, and its metal teeth bind his leg. The operative drops both his gun and Martin’s gun. Martin frees his hands, picks up one of the guns, and kills the operative just as the operative frees himself from the trap and lunges for the other gun. Martin returns to the Armstrong residence to find it burnt down. Confronting Mindy, he learns that Lucy and Katie had perished in the fire, but Jamie survived and was taken by the authorities. Martin sets out into the bush once more to find the Tasmanian tiger and put an end to Red Leaf’s pursuit. He finally finds the creature and reluctantly shoots it, then proceeds to cremate it in order to remove all traces of its existence.

Martin returns to town and calls Red Leaf, informing them that what they are looking for is „gone forever”. He then goes to a school where Jamie sits alone on a bench. When Jamie sees Martin, he runs excitedly toward him and the two embrace.