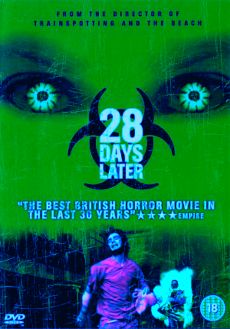 PLOT:  In Cambridge, animal liberation activists break into a medical research laboratory with the intent of freeing captive chimpanzees. They are interrupted by a scientist (David Schneider) who desperately warns that the chimps are infected with „Rage,” a highly contagious virus that is spread through blood and saliva. Ignoring the scientist, the activists release the chimpanzees. One of the chimps attacks an activist and immediately infects her, leading her to infect everyone else present.

Twenty-eight days later, Jim (Cillian Murphy), a bicycle courier, awakens from a coma in St Thomas' Hospital in London. He finds the hospital—and the city—completely deserted with signs of catastrophe everywhere. Jim wanders into a church, where he is spotted and pursued by people infected by Rage. He is rescued by Selena (Naomie Harris) and Mark (Noah Huntley), who throw Molotov cocktails at the „infected”, resulting in the explosion of a petrol station. At their hideout in the London Underground, Selena and Mark explain that a blood-borne, rage-inducing virus spread uncontrollably among the populace, resulting in societal collapse. They claim that infection has been reported in Paris and New York, indicating that the situation is worldwide.

The next morning, Selena and Mark accompany Jim to his parents' house in Deptford, where he discovers that they have committed suicide. That night, two infected see a candle Jim lights in the kitchen and attack. Mark is badly cut and covered in blood from the infected; Selena quickly kills him, later explaining to Jim that the virus overwhelms its victims in no more than thirty seconds. This necessitates the immediate killing of people who may have been infected. She also assures him that, should he become infected, she would kill him „in a heartbeat.” After leaving, at Balfron Tower, they discover two more survivors, Frank (Brendan Gleeson), a cab driver, and his teenage daughter, Hannah (Megan Burns), and are invited to spend the rest of the night with them.

Frank informs them the next day that their supplies, particularly water, are dwindling, and plays them a pre-recorded radio broadcast apparently transmitted by a military blockade near Manchester. The broadcast claims the soldiers have „the answer to infection” and invite any survivor to attempt reaching their safe haven. The survivors board Frank’s cab in search of the signal source and, throughout the trip, bond with one another in various situations. When the four reach the deserted blockade, Frank is infected when a drop of blood from a dead body falls into his eye. As he succumbs, he is killed by the arriving soldiers, who then take the remaining group to a fortified mansion under the command of Major Henry West (Christopher Eccleston).

West shows the group that he keeps an infected soldier, Jim Mailer, chained in a back yard, demonstrating that his „answer to infection” entails waiting for the infected to starve to death while recruiting survivors to rebuild society, also revealing that Mailer was infected two days earlier. However, Jim discovers that part of the „answer” also includes luring female survivors into sexual slavery to rebuild the population with West’s platoon. Jim attempts to escape with Selena and Hannah, but is captured by the soldiers, along with the dissenting Sergeant Farrell (Stuart McQuarrie). During their imprisonment, Farrell theorizes that only Great Britain has been infected and is now quarantined; his theory is confirmed when Jim spies NATO aircraft conducting aerial reconnaissance, revealing that the virus has only spread through the UK, and has not reached mainland Europe.

The next day, Selena and Hannah are dressed in bouffant gowns in preparation for rape, as two soldiers lead Jim and Farrell to be executed. After his escorts quarrel after killing Farrell, Jim escapes. After luring West and Davis to the blockade, Jim bludgeons Davis in the head with a crowbar. Jim runs back to the mansion where he releases Mailer. As Mailer attacks most of the platoon, Private Jones attempts to escape but is impaled by Jim’s bayonet. Jim then finds Selena being taunted by Corporal Mitchell (Ricci Harnett). Jim then bursts into the room and brutally beats Mitchell, smashing his head against a wall and gouging his eyes out. Selena believes Jim is infected, due to his aggressive behaviour, but Jim calms her by telling her „That was longer than a Heartbeat”. The two reunite with Hannah and run to Frank’s cab, only for Jim to be shot by an infuriated West. After releasing West to Mailer and fleeing the mansion, Selena and Hannah rush Jim to a hospital. Jim is saved by Selena, but is once again comatose. The group leaves Manchester.

Another 28 days later, around 61 days after the infection initially spreading, Jim is shown to be recovering at a remote cottage. Downstairs, he finds Selena sewing large swaths of fabric when Hannah appears. The three rush outside and unfurl a huge cloth banner, adding the final letter to the word „HELLO” laid out on the meadow. A lone Hawker Hunter T7 fighter jet flies over the landscape. The infected are shown lying on roads dying of starvation. The jet flies over the three waving survivors and their distress sign while the pilot, speaking in Finnish, calls in a rescue helicopter. As it flies away, Selena says with a smile, „Do you think they saw us this time?”