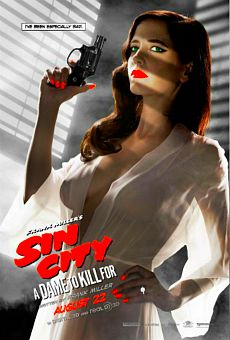 Marv (Mickey Rourke) regains consciousness on a highway overlooking the Projects, surrounded by several dead young men and a crashed police car and with no memory of how he got there. He retraces his steps, recalling since it’s Saturday, he watched Nancy Callahan (Jessica Alba) dance at Kadie’s Saloon. Stepping outside, he encounters four rich frat boys burning a bum alive. When Marv intervenes, the leader of the frat boys shoots him in the arm, calling him „Bernini Boy”, which Marv mishears as „Bernie.” They flee, and Marv follows, stealing a police car on the way, which he crashes into their car, leading to his blackout and memory loss. He follows the two surviving frat boys into the projects, the neighborhood where he grew up, and with the assistance of the deadly residents lurking in the shadows, he dispatches the frat boys. Before killing the leader, he questions him about being called ‚Bernini boy’, (it was the brand of coat he wore,) he slits his throat. Having completed his business, he considers his coat, and realizes he can’t remember how he acquired it.

Johnny (Joseph Gordon Levitt), a cocky young gambler, arrives in Sin City and heads to Kadie’s place, where he immediately hits the jackpot on multiple slot machines. Taking a young waitress, Marcie (Julia Garner) with him as a good luck charm, he buys into the backroom poker game lead by the all-powerful Senator Roarke (Powers Booth). Johnny repeatedly wins in the high-stakes game, and cleans the senator out. One other player, the corrupt police lieutenant Liebowitz (Jude Ciccolella) warns him to get out of town, but instead Johnny takes Marcie out for a night on the town. He walks her home when Roarke’s goons suddenly attack him. He fights them off and tells Marcie to meet him at a hotel before he is escorted into the Senator’s waiting limousine. In payment for the humiliation he suffered at the card game, Roarke takes back his money, then reveals a pair of pliers, which he uses to break three of Johnny’s fingers. They toss him from the car and the Senator shoots him in the leg, at which point he reveals that Johnny is his illegitimate son, but remarks that he only considered his dead son Roarke Jr. (who was killed during the events of the first film) his flesh and blood. He leaves Johnny alive, preferring to let him suffer, and Johnny swears revenge.

„A Dame to Kill For”

Years before „The Big Fat Kill”, Dwight McCarthy (Josh Brolin) attempts to put his violent past behind him, working as a private detective and leading a life of complete sobriety, struggling daily to refuse his inner demons. After saving the life of a young hooker (Juno Temple) who is nearly murdered by her businessman lover (Ray Liotta) he receives an unexpected phone call from his former lover Ava Lord (Eva Green), who left Dwight four years prior for a wealthy tycoon, Damian Lord (Marton Csokas). She begs him to meet her at Kadie’s saloon, and despite his embittered feelings, he agrees. When Ava arrives, she begs forgiveness for leaving him, and infers she is afraid for her life before her massive chauffeur, Manute (Dennis Haysbert) arrives to escort her home. Unable to get her out of his mind, Dwight sneaks into Damian Lord’s estate, where he observes Ava swimming, but is caught and beaten for his trouble. Dwight is returned home, where a nude Ava waits for him. He tries to throw her out, but can’t resist her and they make love. She tells him that Damian and Manute torture her physically and mentally, and she knows Damian will kill her soon. Manute arrives and viciously beats a naked Dwight, tossing him out a window.

Determined to rescue Ava, Dwight recruits Marv to help him, and they mount an assault on Lord’s compound. Marv attacks Manute, putting him in traction and tearing out his eye. Dwight confronts Damian Lord, who denies Ava’s accusations, and an enraged Dwight beats him to death. As he reacts in horror, Ava appears and shoots Dwight several times, taunting him and thanking him for helping her murder her husband and take over his business. She shoots him in the face and forces him to fall out of a window, where Marv rescues him and takes him to Old Town. Dwight’s old flame, Gail (Rosario Dawson), recognizes him and saves his life. With the help of Gail and the deadly assassin Miho (Jamie Chung), Dwight undergoes reconstructive surgery on his face and plots his revenge.

Meanwhile, two detectives, Mort (Christopher Meloni) and Bob (Jeremy Piven) investigate Damian’s death. Ava claims Dwight was an obsessive ex-lover, and he killed her husband in a jealous rage. Bob is skeptical but Ava seduces Mort, who believes her every word. They begin an affair and Ava pressures him to find and kill Dwight. When Mort, obsessed with Ava, attempts to track Dwight down in Old Town (an action that would break the truce between the police and the prostitutes), Bob attempts to stop him. An enraged Mort shoots Bob in the head, then turns the gun on himself and dies on the roadside. Out of options, Ava reluctantly partners with the mob boss Wallensquist (Stacey Keach).

Dwight (with his reconstructed new face), accompanied by Gail and Miho, poses as Wallenquist’s man from Phoenix. Inside Ava’s estate, however, Manute sees past the new face and captures Dwight. Gail and Miho strike from Dwight’s car, and Dwight shoots Manute with a hidden .25 he had up his left sleeve. Six bullets fail to kill him, and Manute aims shakily at Dwight as Ava unexpectedly grabs one of Manute’s guns, shooting Manute several times. She attempts to convince Dwight to pair with her, and that the pain he suffered revealed his true intentions, but Dwight shoots her mid-kiss, and she dies in his arms.

Johnny visits an unlicensed doctor, Kroenig (Christopher Lloyd) who shoots up heroin before trading his services for Johnny’s last forty dollars and his shoes. Realizing he left Marcie unprotected, Johnny flees to her hotel, but finds the Senator waiting for him along with Marcie’s dismembered head and hands. Again, the senator lets him go. Intent on taking down Roarke, Johnny scrounges a dollar from a sympathetic waitress (Lady Gaga) which he uses to regain enough money playing slots to buy his way into Roarke’s game the following night. Playing a card shark’s con, Johnny folds his first few hands, allowing Roarke to taunt him about his dead mother. He once again cons Roarke into going all in, and then reveals his winning hand. Johnny taunts his father, reminding him that tonight’s story of how the same man beat him twice will follow him for the rest of his life. His vengeance completed, Johnny smiles resignedly as Roarke dismissively shoots him in the head, commanding his men to get rid of the body.

Set four years after „That Yellow Bastard”, Nancy Callahan struggles to cope with John Hartigan’s selfless suicide. Drinking heavily, she became obsessed with vengeance on senator Roarke, who drove Hartigan to kill himself. As she wallows in despair, the ghost of Hartigan (Bruce Willis) watches over her, unable to reach her but still attempting to help. On the same night that Johnny joins the backroom poker game, Nancy attempts to shoot Roarke from the stage of Kadie’s, but finds herself unable to pull the trigger, possibly due to Hartigan’s ghostly influence.

Nancy hallucinates a visit from Roarke, and shortly thereafter cuts her hair and smashes a mirror, using its shards to cut her face. Having witnessed Nancy’s downward spiral, Marv steps in and volunteers to help her kill Roarke. A motorcycle gang attacks them, most of whom Marv kills, but he leaves their leader for Nancy to finish off. The pair mount an assault on Roarke’s compound, and Marv slaughters Roarke’s bodyguards while Nancy picks off the guards with a crossbow. Marv is wounded, and Nancy continues on to confront Roarke by herself. Roarke shoots her several times and is about to finish her off when Hartigan’s ghost suddenly flashes in the mirror to distract him, which gives Nancy enough time to recover and shoot him dead.