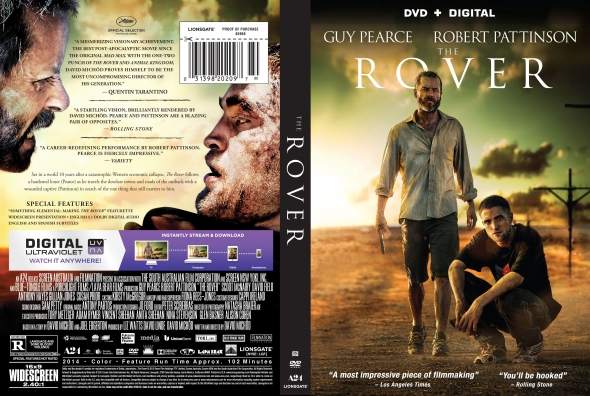 Plot: 10 years after a global economic collapse, people from many different races have moved to Australia and the American dollar is the most common currency. After a robbery gone wrong, Archie (David Field), Caleb (Tawanda Manyimo) and Henry (Scoot McNairy) flee, leaving behind Henry’s injured brother Rey (Robert Pattinson). While driving away, Archie mocks Rey and Henry attacks him, causing Caleb to crash. When they cannot start the car, Archie steals the car belonging to mysterious loner Eric (Guy Pearce). Eric manages to start the getaway vehicle and follows them. After a brief chase, Archie stops and Eric confronts them. When Eric tries to attack Archie, Henry knocks him unconscious with a shotgun.

Eric wakes up and drives his new car into town, where he wanders into several establishments, asking if they have seen the men. He goes to an opium den, where he finds a dwarf and two Chinese acrobats from a travelling circus in the backroom. Eric follows the dwarf to his trailer, where he offers Eric a gun for US$300. Eric shoots the dwarf in the head and leaves. After another confrontation with the opium den’s owner, he walks back to his truck and finds Rey, who asks why he is in Henry’s car. Eric asks Rey where Henry is, but Rey faints.

After seeking help from a shopkeeper, Eric takes Rey to a doctor (Susan Prior), who performs surgery on him. The next day, Eric sees two cars approaching in the distance and takes the doctor’s rifle. He kills one of the drivers and his passenger, the Chinese acrobats seeking revenge. Another acrobat goes to investigate and is shot in the head by Eric, who leaves with Rey.

Eric and Rey stay at a motel in an almost-abandoned town. While Eric sits outside, Rey takes Eric’s gun and sees an Army truck driving down the street. He is shot at, as someone tries to open the door. He shoots through the door and is shocked to find he has killed the daughter of the motel’s owner. He is then shot at by a soldier (Nash Edgerton). Eric comes to the rescue, killing the soldier and driving away from the scene.

While camping near an abandoned mine, Eric is arrested by a soldier (Anthony Hayes). At a small Army base nearby, he learns he is being deported to Sydney. Eric tells the soldier that he killed his wife after learning she had an affair, but the soldier ignores him. When the soldier hears gunfire, he goes to investigate but is killed by Rey, who has broken into the base to rescue Eric.

Eric and Rey arrive at the town where Henry and the gang are hiding. They find Eric’s car outside a house and break in. Eric holds Archie and Caleb at gunpoint, while Rey goes to confront Henry. After an argument, they shoot at each other: Rey misses, but Henry shoots Rey in the throat. Eric kills Archie and Caleb, before walking into Henry’s room and finding Rey’s corpse. He shoots Henry in the chest and burns the bodies. Later, Eric pulls to the side of the road in his car. It is revealed that he has been obsessed with finding his car because the body of his dead dog is in the trunk. The movie ends with Eric preparing to bury his dog.