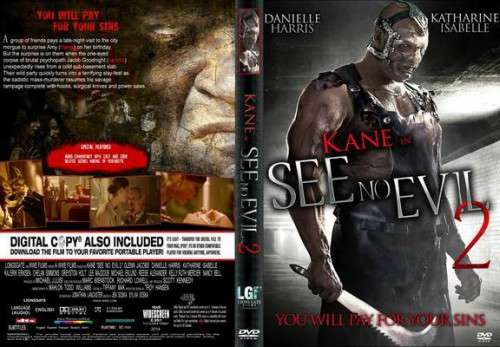 PLOT – Mortician Amy is celebrating her birthday with her friends at the morgue after an emergency influx of bodies means she has to cancel her birthday night out. After Jacob Goodnight’s slaughter in the first movie, the bodies of both him and his victims are brought to the morgue, only Jacob isn’t quite dead…

SEE NO EVIL 2 is the sequel to WWE Studios horror featuring the big red monster, Kane aka Glenn Jacobs. Glenn Jacobs is a veteran of the wrestling business, performing his storylines in front of thousands of people as the whopping, 7ft masked WWE wrestler. This mammoth of a man is perfect to play a horror villain and does so with glee as Jacob Goodnight in See No Evil. In this, the sequel, Twisted Twins Jen and Sylvia Soska, known for Dead Hooker In A Trunk and the brilliant American Mary, take the helm as directors and bring back their American Marystar Katharine Isabelle to star as one of the friends of Amy, played by horror scream queen Danielle Harris. Michael Eklund (The Divide), Chelan Simmons (Final Destination 3), Greyston Holt (Bitten), Lee Majdoub (ABC’s of Death 2) and Kaj-Erik Eriksen (Poltergeist: The Legacy) round up the rest of the cast in this tight-knit, isolated slasher horror.

Much like Halloween 2 follows straight on from the events of the first Halloween film, See No Evil 2 is where the first movie’s victims end up – a morgue. Already a creepy place to be in, Amy, her co-workers and friends soon becomes trapped in the huge building with the murderous Jacob Goodnight as he slowly thunders down the hallways with his hooked, jagged knife and sharp hook and chain in hand. No matter where they try and hide, the bad guy is never far behind. The hulking, relentless Goodnight doesn’t say much during the film, instead letting his door-smashing, throat-crushing and knife-slicing do the talking. Katharine Isabelle provides the laughs as hyper-active and horny Tamara who can’t stop getting on with her boyfriend Carter (Lee Majdoub), whilst Greyston Holt provides the brawn as Amy’s towering older brother, Will, who blonde bimbo Kayla (Chelan Simmons) has the hots for. Wheelchair bound Holden (Michael Eklund) acts as the overseer of the facility, which leaves sensitive mortician Seth (Kaj-Erik Eriksen) to fawn over Amy from afar as they try to escape the morgue with their lives.

Whilst some of the kills are familiar to those who’re into slasher movies, a few creative deaths are introduced and work really well to get the viewer’s attention. The camera shots and angles savour the moment that the characters are injured or killed, allowing the viewer to soak up that bright red spray. Having the characters trapped in a singular, isolated location only heightens the tension and panic as the characters make their way through the building.

Slashers are normally ten a penny but See No Evil 2 feels different. It’s a clever slasher, one that is calculated enough to play on the usual stereotypes yet bring in a few new ideas of its own and deliver successful suspense and scares. The Soska twins have an elegance about their movies, an aspect I can’t quite put my finger on but it’s truly evident here as it was in American Mary. Having a strong cast with Danielle Harris taking the lead only helps to further the appeal to horror buffs and to cement the film as a solid slasher that is worth checking out.