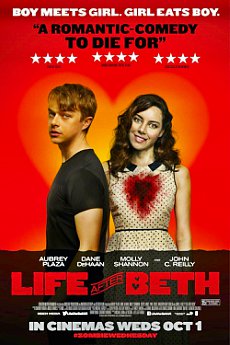 PLOT:  When his girlfriend Beth Slocum dies from a snake bite while on a hike, Zach Orfman is devastated. He begins to spend time with Beth’s parents Maury and Geenie as a source of comfort. While playing chess and smoking marijuana with Maury, Zach confesses that he and Beth were having problems in their relationship, and that she had expressed desire to see other people in the days before she died.

Days pass, and the Slocums suddenly stop all contact with Zach. Curious, he goes to their house and sees Beth through a window. He attempts to break in, but the Slocums call Zach’s brother Kyle, who is a security officer, and escorts Zach off the premises. The next day, he goes to Beth’s grave and sees a large hole in its place. He breaks into Beth’s house and discovers that her parents had been hiding her. They explain that soon after the funeral Beth suddenly appeared and aside from having no memory of the past week, appears and sounds completely normal. Beth’s parents are reluctant to let her leave the house, especially during daytime. They refuse to explain to Beth that she is dead and she remains unaware. A daytime date in the park results in Beth getting blisters on her face – seemingly from the sun.

Zach starts to notice people around town acting strangely similar to Beth, who has grown increasingly violent and has mood swings; the only way to calm her down is through smooth jazz music. He realizes he cannot handle her, especially after she flies into a violent and jealous rage when she sees him having lunch with his childhood friend Erica Wexler. Zach explains to Beth that she died and somehow came back, she doesn’t believe him until he takes her to her grave. There, Zach attempts to break up with Beth, but she grows angry and steals his car. Zach walks home to discover that his dead grandfather is resurrected and has returned to his parents house, closely followed by the previous owners of the house. Maury picks up Zach and tells him that Beth is extremely upset so he must tell her that he lied about her death and promise to be with her forever. Zach refuses, but relents after Maury agrees to call his former housekeeper, who is Haitian, to see if she has any information about the unusual events.

Zach attempts to talk to Beth, but after she eats a neighbor, he drives away with her in the car. They head to the Haitian’s apartment, where it is revealed that why she left had nothing to do with zombies. Maury appears, knocks Zach out, and takes Beth. Recovering, Zach heads home to look for his family, but instead finds a stranger in his house and burned bodies in the backyard. Believing his entire family is dead, Zach packs his bags, and prepares to leave the state. He relents and drives back to the Slocum house.

At this point, Beth has become a full-fledged, bloodthirsty zombie, eating Maury and biting off Geenie’s hand. Zach convinces Geenie – who had tied Beth to a kitchen stove – to leave. He calms Beth by promising to hike with her like she always asked him to. They run into Kyle, who reveals to Zach that their parents are still alive, having escaped to a safe house. Kyle attempts to shoot Beth, but Zach protects her. Kyle agrees to let them escape, but gives Zach his gun, reminding him to let Beth go.

On their hike, Zach and Beth stop by a cliff. He tearfully apologizes to her for never doing the things she wanted when she was still alive. They say „I love you” to each other, and Zach shoots her in the head. Beth tumbles down the cliff, with the stove – still tied to her body – crushing her.

Zach reaches the safe house, where he finds his family, along with a traumatized Erica. She was forced to kill her own grandmother, who had become a zombie herself. They make plans to escape, but a TV news story shows that things are returning to normal. Zach visits Beth’s and Maury’s graves one final time. He leaves Beth’s scarf, given to him by Geenie after the funeral, on her tombstone, along with a knight chess piece on Maury’s. Later on, he invites Erica for dinner. Smiling at him, Erica accepts his invitation.